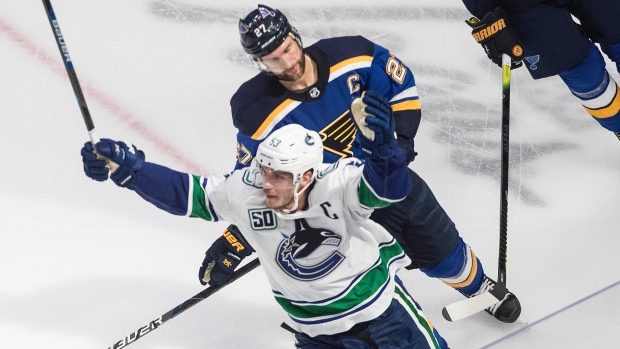 Vancouver Canucks captain Bo Horvat knows his team has a lot to prove this season.

After finishing third in the Pacific Division with a 36-27-6 record last year, few onlookers believed the squad would make a deep post-season run.

Yet the Canucks beat the Minnesota Wild in the qualifying round and dispatched the then-defending Stanley Cup champion St. Louis Blues before being eliminated by the Vegas Golden Knights in a seven-game Western Conference semifinal.

"We took a huge step in the bubble but now we’ve got to back that up," Horvat said. "We’ve got to hold ourselves to a higher standard, and we want to get better and better every game this year.”

Improving could be a challenge after the Canucks lost several key pieces in free agency, including all-star goalie Jacob Markstrom and veteran defenceman Chris Tanev, who both signed with the Calgary Flames.

Much of Vancouver's skilled young core remains, however, including centre Elias Pettersson, who tallied 66 regular-season points (27 goals, 39 assists) in his second season, and defenceman Quinn Hughes, runner-up for the league's rookie of the year last season.

Coming to the end of a truncated training camp, Canucks coach Travis Green likes what he sees from his group.

"The tempo of our practices has been sharp, the execution has steadily been getting better. I thought the competitiveness of our last game was high," he said. "I like the way our team looks right now and we’re ready to get going.”

After finishing last year's unusual season on a high, the Canucks are a tight-knit group full of players constantly pushing one another to improve, Horvat said.

"We all want the same goal at the end of the day and that’s to win," he said. "And I think that’s the biggest thing you can ask from our teammates is for the guy beside you to go to war with you. And I think we have that in our room.”

With Markstrom gone, Vancouver inked former Washington Capitals netminder Braden Holtby to a two-year, US$8.6-million deal. The former Vézina Trophy winner will share the net with Thatcher Demko, who posted a 13-10-2 record in regular-season play last year. When an injury sidelined Markstrom in the playoffs, Demko stole the show with highlight-reel stops and a .985 save percentage across his three starts.

Hughes put up 53 points (eight goals, 45 assists) in his first full season, leading all rookies in scoring. The 21-year-old defenceman spent the off-season training with his brother, Jack — the No. 1 overall pick at the 2019 NHL draft — and said he's feeling more mature and stronger heading into his sophomore campaign.

J.T. Miller has set his sights on helping Vancouver's power play become one of the best in the league. Last year, the veteran winger registered 25 of his 72 regular-season points with the man advantage and the Canucks had the fourth-best power play in the league (24.2 per cent).

Forward Josh Leivo also decamped to Calgary with Markstrom and Tanev in free agency, while sniper Tyler Toffoli signed with Montreal and homegrown defenceman Troy Stecher moved on to the Detroit Red Wings. To help fill some holes, the Canucks signed Holtby in free agency and acquired defenceman Nate Schmidt from the Golden Knights. Vancouver also brought in blue-liner Travis Hamonic on a professional tryout contract and is expected to make the agreement more permanent this week.

The Canucks will have a tough stretch to start, playing back-to-back games three times in January. The early crunch should pay off at the end of March when the team is scheduled to get six days off in a row.