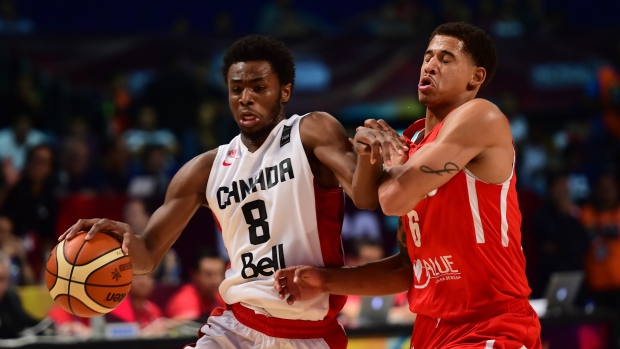 MEXICO CITY - Andrew Nicholson isn't thinking about the specific scenarios that would ensure Canada the top seed at the FIBA Americas Championship.

The Mississauga, Ont., native would rather not complicate things.

"Simple formula: we've just got to win," Nicholson said following a 15-point performance off the bench Tuesday that helped propel Canada to a 94-73 victory over host Mexico.

Canada would need to close out the second round of group play with a win over the Dominican Republic, and hope that Mexico can beat Argentina by 35 points or less in order to wrap up first place heading into the Olympic qualifying tournament's semifinals.

The top two teams at the tournament earn berths to next summer's Olympic Games in Rio.

Canada, which hasn't participated in men's basketball at the Olympics since the 2000 Games in Sydney, is well on its way to returning there after Tuesday's win.

Andrew Wiggins poured in a game-high 17 points as the Canadians won their sixth straight game, and Nik Stauskas and Melvin Ejim — with two dunks in the final two minutes — chipped in with 12 points each.

"He's a great player," Canadian head coach Jay Triano said of Wiggins. "Rookie of the Year in the NBA, he's adapted and fit into everything that we've asked him to do with our team here and because of that he's become one of our leaders. (He's) a guy we can run plays for or put in situations where he can make plays for others."

Francisco Cruz led Mexico with 13 points. Paul Stoll and Adrian Zamora had 11 apiece off the bench.

Brady Heslip scored eight points in the second quarter while Canada's defence stepped up to carve out a 52-30 advantage at half-time.

Mexico came out of the locker-room with an edge but could not contain the Canadian offence. The two teams played to a draw in the quarter and headed to the fourth with Canada up 74-52.

"We're getting more comfortable playing with each other," said Triano. "Our players are starting to understand and learn the international game a little bit better because we come from varied backgrounds.

"Our goal was to get better with each game as the tournament has gone on and we struggled in the first game, but I think we've taken a step every day."