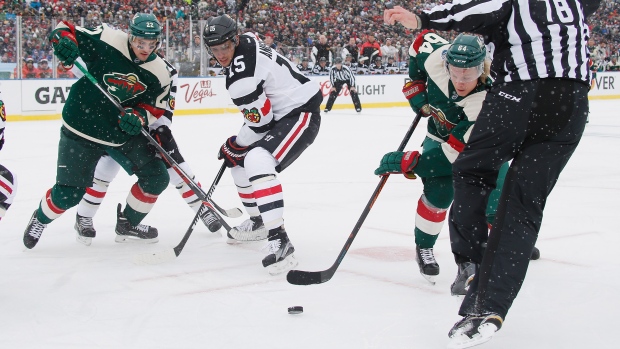 The Minnesota Wild are one week away from going to arbitration with Michael Granlund and an eight days from a hearing with Nino Niederreiter.

Wild general manager Chuck Fletcher told the Minnesota Star-Tribune on Wednesday the team is hopeful to reach at least a three-year deal with each player. Fletcher said, however, that any deals will likely come "at the 11th hour" as the two sides are spurred by the looming arbitration date.

“We’ll keep plodding along,” Fletcher said. “Everyone’s working hard, we’ve had good dialogue, but obviously we haven’t gotten to the finish line yet. If you look around the league, negotiations tend to go right down to the arbitration day or the day before or the day after the hearing sometimes even.

“Nothing prods progress more than a deadline.”

No player has completed the arbitration process this off-season, though eight players have exchanged briefs 48 hours ahead of their hearing and two (Tomas Tatar and Viktor Arvidsson) sat through their hearing but reached a contract before a decision was reached.

Fletcher said the team is willing to fall back on the arbitrator's ruling and renegotiate with the players next year, if need be. The team's preference, however, would be to two 2010 first-round picks to deals through at least the 2019-20 season.

“We’re open to any angle,” Fletcher told the Tribune-Review of the length of a deal. “I guess anything’s possible, but somewhere in that three- to five-year range would probably work well for everybody. That’s not to preclude a longer deal, but that’s not where the focus has been on our end.”

Granlund, 25, led the Wild with 69 points last season and scored a career-high 26 goals. Entering the season, he owned just 31 goals in 240 career games with the Wild. He added two assists in five games in the postseason as the Wild were eliminated in the first round.

Niederreiter, 24, recorded 25 goals and 32 goals in 82 games last season. He's scored 20 or more goals in each of the past three seasons with the Wild. Minnesota acquired the Swiss winger for Cal Clutterbuck and a third-round draft pick in June 2013.

According to CapFriendly, the Wild have $15.8 million in cap space with Granlund, Niederreiter and recent acquisition Marcus Foligno left to sign. Foligno was eligible, but did not elect for salary arbitration after being traded from the Buffalo Sabres.

Fletcher said the team is focused on using their remaining cap space on the trio and will only consider adding an unrestricted free-agent once the three are signed.