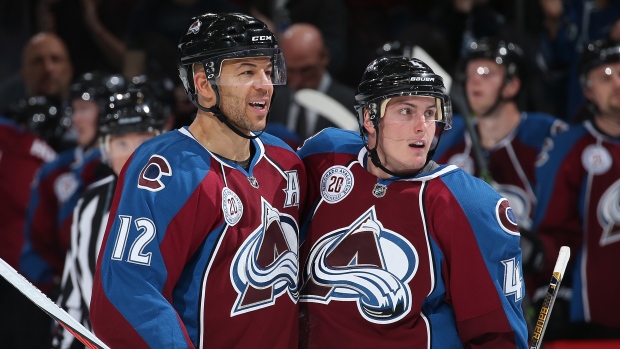 Who doesn't want to see Jarome Iginla escape the Colorado Avalanche and get another playoff run under his belt before he retires?

The 39-year-old winger has publicly stated his desire to join a playoff team if at all possible.

Could a reunion with his former Calgary Flames coach/GM Darryl Sutter be a possibility? A source told ESPN.com that the Los Angeles Kings have kicked around the merits of that idea given that history between their coach and Iginla. Whether the Kings actually decide to act on it and call Colorado about it remains to be seen.

The Kings have struggled offensively, so the question is whether Sutter feels he can get some juice out of Iginla at this point of his remarkable career.

If Kings GM Dean Lombardi does decide to proceed on the Iginla front - and again, let me stress he may not - that $5.33 million cap hit will be an issue. There's no question that the Kings would need the Avalanche to eat some of it.

What about the Edmonton Oilers? Edmonton is, after all, Iginla's hometown. So it's a romantic thought, for sure. His experience alone would be a nice addition for the young Oilers, who look to be playoff-bound for the first time in 11 years. But I think Edmonton's trade-deadline focus is on a third-line centre at this stage.

Whatever the case, there doesn't seem to have been much traction yet on the Iginla front. I don't believe Colorado has received much interest in him yet yet. Veteran agent Don Meehan is scheduled to meet with Iginla, who has a full no-move clause, at some point next week.

- Teams that strike out on Martin Hanzal may turn their attention to the Tampa Bay Lightning's Brian Boyle, a pending unrestricted free agent and another beast of a third-line centre, if the Bolts decide to move him. For now, though, I think Tampa Bay is in a holding pattern in terms of its trade deadline plans. The Lightning are hoping to continue the high level of hockey they played before their bye week and get closer to a playoff spot over the next two weeks. Boyle could be an 11th-hour decision closer to March 1.

- Pending UFAs Kyle Quincey and P.A. Parenteau will likely be shipped out before March 1 unless the New Jersey Devils claw their way into a playoff spot. Quincey could be an under-the-radar add-on. The left-handed defenceman plays the right side and has averaged more than 18 minutes a night. And his cap hit ($1.25 million) is easy to digest.

- Speaking of the Devils, they will have 10 draft picks in June (including two second rounders, two third rounders and two fourth rounders) and may add more by dealing rental players at the deadline. Some of those picks are assets to be used in future trades, as the Devils hope to be aggressive this summer in filling needs and perhaps seeking out teams with salary-cap issues.

- Trade deadline targets for the playoff-bubble Flames: a top-nine forward who can help the offense and a defenceman -- perhaps as a rental. The Flames to try to add a young, top-four type blueliner for the long term during the offseason.

- The Toronto Maple Leafs aren't going to mortgage the future for a short-term fix just because they're in the playoff race. The Leafs' long-term plan will prevail, but it's worth noting that if they do indeed need more cap room at the trade deadline they have up to $13.5 million in cap space available from Nathan Horton, Joffrey Lupul and Stephane Robidas, who are all on long term injured reserve. The Leafs haven't used those LTIR dollars all year, and have been carrying those three players under their cap.

- San Jose Sharks GM Doug Wilson is always sneaky at this time of year, but I'm not hearing San Jose mentioned in talks as much as I'm used to. It may be because the Sharks feel that they did a lot of their work last summer, when they added the likes of Mikkel Boedker and David Schlemko, and because they're 30-deep with their NHL/AHL options. Still, it's Wilson we're talking about, and he always has his ear to the ground at this time of year.