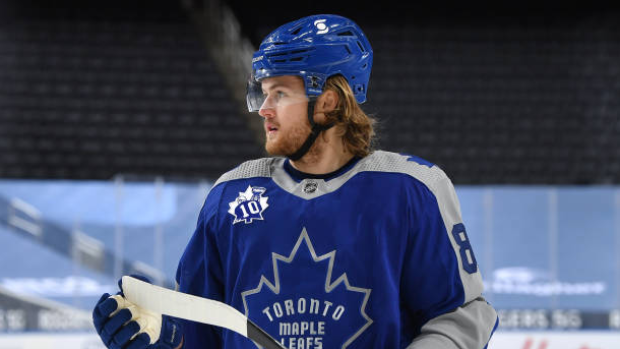 TORONTO — It wasn’t William Nylander’s own well-being that concerned him most after being placed in the NHL’s COVID-19 protocols 10 days ago. It was what a potentially positive diagnosis might mean for the rest of his Maple Leafs teammates.

That led to some difficult days and nights for Nylander, who unknowingly came in contact with an infected person on April 6. Before learning of his proximity to the positive case, Nylander participated in the Leafs’ morning skate ahead of their game against Montreal on April 7. He informed the team around lunchtime about the issue and was immediately placed in quarantine.

Nylander returned negative tests for nine days thereafter, and was subsequently allowed to rejoin the Leafs yesterday on their road trip to Vancouver.

“Those [first] few days where I was being tested every day, I was pretty nervous,” Nylander said on Saturday after his first practice in over a week. “But thank God nobody got it. That was the probably the number one thing that I was worried about, [that] maybe [I’d] get it and give it to the guys, which is something that I really didn't want to happen.”

That worst-case scenario never came to pass as Nylander endured his long stint in isolation. Toronto got Nylander an exercise bike and he used it to distract himself while attempting to stay in game shape. He skated for the first time on Friday before the Leafs’ flight out west, and got through their practice fine, but couldn’t say whether he’d be ready to face the Canucks on Sunday after a five-game absence.

“I’m feeling pretty good,” he said. “[The challenge] is just getting back into games. We’ll see if I play tomorrow and we'll go from there.”

Also returning to practice for the Leafs on Saturday was Auston Matthews. The NHL’s top goal-scorer sat out Thursday’s 5-2 loss to Winnipeg with an undisclosed injury and is considered day-to-day. In Vancouver, Matthews was back at his usual perch on Toronto’s top line with Mitch Marner and Alex Galchenyuk, and will be a game-time decision for Sunday.

Elsewhere in the Leafs’ lineup, coach Sheldon Keefe was shaking things up. Toronto is currently mired in a three-game winless streak (0-2-1), so for Saturday’s session Keefe moved rookie Nick Robertson onto Toronto’s second line with Nylander and John Tavares.

Keefe still called Nylander a game-time decision for Sunday as well, but identified a number of ways the winger’s return to that unit would make a difference.

“This time we've played without him, some areas of our game have really slowed down,” Keefe said. “When you take someone like Will and his strengths [out], with how he brings the puck up the ice, how he gets to the neutral zone, how he attacks the offensive blue line, I think those are all areas that our offence has really dried up, and we haven't had nearly as much control of the puck. That's something he does very well for us and it'll be nice to have that back.”

“He's a big part of our team. He plays with a lot of speed, a lot of skill,” said Morgan Rielly. "And he's obviously crucial to his linemates and on the powerplay, so we're very happy to have him back. He did his thing with the protocol and he says he's feeling good, so I think he'll be flying tomorrow [if he plays] and it's just nice to see him back around the guys.”

Having Nylander and Matthews slotting in would also be the Leafs’ best hope of getting their abysmal power play back on track. Toronto is 1-for-42 in its last 17 games with the extra man, and on Saturday Keefe has reunited his original top unit of Tavares, Nylander, Matthews, Marner and Rielly.

“As we've gone through this stretch here, we’ve tried a little bit of everything, including having those guys together and it didn't work for us,” Keefe said. “But we've looked at a number of different things, and we think that we probably would have gone to it sooner had we not lost Will and Auston. I think the timing is right here now, and the fact that we had both yesterday to get some rest and a practice day today, it's a good opportunity for us to just get refreshed and start anew.”

That search for more offence all over the ice also influenced Keefe’s decision to elevate Robertson. The 19-year-old has been plagued by injuries and only skated in four games for Toronto this season, notching one assist. But with the Leafs getting outscored 12-6 in their last three games, Keefe is fanning any kind of spark he can find.

“He's out there looking to make a difference,” Keefe said of Robertson. "He's doesn't look overwhelmed by any means and he's just getting more and more comfortable in the NHL. When he gets the puck, he's looking to make something happen and he's working and competing, he's been good defensively. Lots of really good things that I've seen from him.”