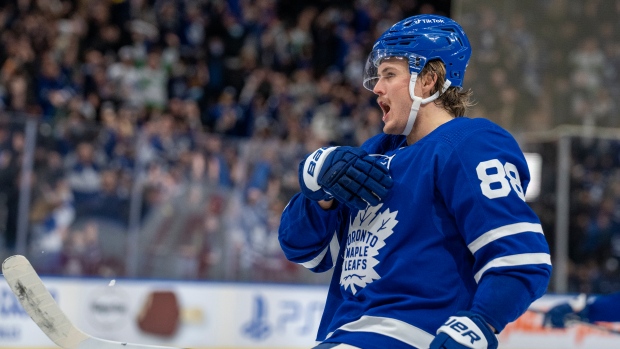 The Maple Leafs held a media availability at Scotiabank Arena on Sunday afternoon.

William Nylander will remain on Toronto's third line with David Kampf and Pierre Engvall to start Sunday's game against the Florida Panthers. Ilya Mikheyev will continue to slot in beside John Tavares on the second line.

"The hope is that Mikheyev can just continue to play with the speed and the confidence that he has and that changes the dynamic of things a little bit there," coach Sheldon Keefe said. "Micky has played with John at various times over the last few years so let's see what that can bring. Kampf and Engvall have been responsible and are good both ways and, obviously, Willy brings an offensive threat there too."

Nylander was moved off Toronto's second line on Saturday night in Montreal following a poor effort on a second-period goal by David Savard.

"I had a mistake there on the backcheck," Nylander admitted. "I didn't backcheck all the way on Savard. That's a big factor. I got to be there to stop that."

Keefe had been reluctant to split up his third line, which has enjoyed a lot of success in a checking role, but felt his hand was forced.

"That was the third or fourth play like that for Will," Keefe said. "That is why I thought it was time. Obviously, things have been piling up for that line for a while. It was overdue."

Nylander scored on the power play in the third period. It was his 24th goal of the season to go along with 35 assists in 64 games. Nylander is now on pace for a career-high of 76 points, but the puck is also going in at an alarming rate when the 25-year-old is on the ice. Since Jan. 18, Nylander owns the worst plus-minus mark in the entire NHL (-20 in 28 games).

Is Keefe satisfied with Nylander's play over the last month?

The coach didn't want to get into specifics.

"I am not even going to answer the questions," Keefe said when pressed on which ways Nylander can be better. "I am not going to pile on Will here. He knows what makes him great. He knows what he needs to get back to."

Nylander is minus-13 on the season, which is the worst mark on the Leafs.

Nylander played parts of two games with Kampf shortly before the All-Star break when Keefe experimented with a more spread-offence look.

Keefe believes the timing is right to stick with a middle-six shuffle in part because of the challenge presented by the Panthers.

"This is a four-line team," the coach said. "They're going to come at us here. The way we have things balanced, it makes a lot of sense."

The Panthers are the only team the Leafs haven't faced yet this season. First-place Florida sits nine points ahead of Toronto. What stands out about the Atlantic Division frontrunners?

"Speed, skill, depth," Keefe said. "Offence can come from any of the four lines. In fact, their third line is equally as productive as their top six so lots to be aware of there. They come with a lot of pace, a lot of competitiveness. They're a physical team. They've been the class of the Eastern Conference."

Both teams have 18 games remaining with three head-to-head encounters, including Sunday night. The next two showdowns will be in Sunrise.

The Leafs enter play on Sunday in fourth place in the division. Toronto sits two points behind the Boston Bruins and three back of the Tampa Bay Lightning.

Petr Mrazek faces the biggest test of his star-crossed season tonight as the NHL's highest-scoring team visits Toronto. The Panthers lead the league in goals (4.05 per game) and shots per game (37).

"In my opinion, Mrazek's coming off of what was his best start of the season just in terms of how he looked to me," said Keefe, "how he competed and how he played in the net and how confident and focused he looked."

Mrazek stopped 20 of 22 shots (.909 save percentage) in Wednesday's win against the New Jersey Devils.

"I felt really comfortable," Mrazek said. "I felt I was in the game all game. The focus was on the things I could control."

Mrazek, who cleared waivers earlier this week, has only posted consecutive games with a save percentage above .900 once this season.

The Panthers, who are also playing on back-to-back nights, will go with rookie Spencer Knight between the pipes. He started the first five games of Florida's current road trip going 3-1-1 with a .923 save percentage.

Sergei Bobrovsky returned from injury to pick up a win on Saturday night in Ottawa.

Plan is for Campbell to travel with the Leafs to Boston & skate with teammates on Tuesday ... and then likely have his first full practice since the injury on Wednesday @TSN_Edge

With Aaron Ekblad sidelined due to injury and Claude Giroux recently added via trade, the Panthers have moved to a five-forward alignment on their top power-play unit. Aleksander Barkov now plays the point.

"Actually, I don't mind it," the centre told reporters on Saturday night. "We tried it in the playoffs last year. You have to feel comfortable and confident because you're on top and if you don't make the right plays the puck is not going to stay in the zone."

Florida is 2/8 on the power play in two games with Giroux in the lineup.

Barkov scored a six-on-five goal from the point to tie the game in Ottawa on Saturday night.

"I don't think I've ever scored a goal from the blue line," the reigning Selke Trophy winner said with a smile. "That was one to remember."

The Leafs scored a pair of shorthanded goals on Wednesday and lead the league in that department with 10 this season.

"It is a pressure kill," said Keefe. "We are applying pressure. We are putting people in bad spots. Our guys anticipate very well. It is the instincts of the players and the speed to close quickly and then the skill level to make plays and finish plays."

The Panthers are tied for second in shorthanded strikes with nine.

The Leafs have won 55.6 per cent of their faceoffs this season to lead the league. The Panthers, meanwhile, are winning 47.5 per cent of their draws, which is 25th overall. However, the addition of the right-handed Giroux will provide a big boost. Among players who have taken at least 100 draws, Giroux is fourth this season with a 60.8 per cent win rate.

"You can trust him and talk about different plays when he's taking faceoffs because there's a good chance he's winning it," said Barkov, who's a lefty.

Moments before Barkov's goal on Saturday, Giroux won a key draw in the offensive zone.

The Leafs experienced a rare off night at the dot on Saturday winning just 41 per cent of faceoffs against the Canadiens.

Giroux face-off value on full display already for Florida. Wins a draw to set up the tying goal with 2:20 to go. Proceeds to win 3 draws clean in the last 45 seconds of regulation. He's going to win a big draw in a big moment in the playoffs. pic.twitter.com/JK55IRud8d

Newly-acquired defenceman Mark Giordano has met and perhaps even exceeded expectations in his first two games with his new team. In fact, Keefe has picked up on a buzz on the bench when it comes to the 38-year-old's savvy work.

"You could even hear some of the players talking amongst themselves about some of the subtle plays he is making, especially on our half of the ice breaking up plays, moving the puck up the ice, and just the poise," Keefe said. "He has been really good."

"He was great," Auston Matthews agreed following Saturday's game. "He made some unbelievable plays. He's impressive so far. It's not easy to step right in and play valuable minutes."

The Leafs will travel to Boston on Monday. The team's next skate/practice will be Tuesday morning at TD Garden.

Harvard forward Nick Abruzzese, who signed with the Leafs this week, will meet the team in Boston.