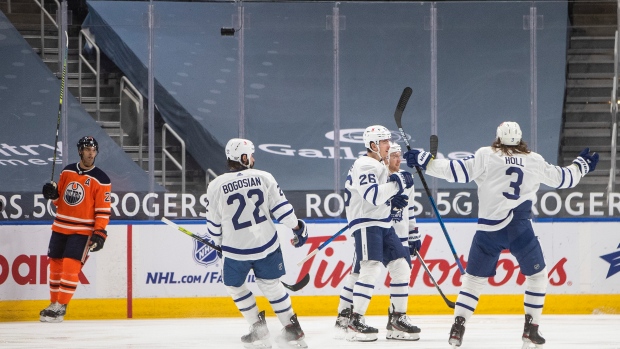 TSN Toronto Reporter Mark Masters reports on the Maple Leafs, who held a team meeting in Vancouver on Thursday ahead of tonight’s game against the Canucks.

Even as the wins pile up, the Leafs have maintained their focus and hunger. If a player starts slipping, they hear about it right away.

"Making sure we're keeping each other accountable, that's been something we've been trying to work on every day and it's been getting better," noted alternate captain ​Mitch Marner. "We got a lot of guys standing up and talking in the room now and a lot of guys listening."

What is Sheldon Keefe noticing?

"Just little things on the bench, on the ice, just the way the guys talk to each other," the coach said. "It's not in a demeaning way by any means, but it's another area we've focused on since the start of camp is just being more direct."

After a roller-coaster 2019-20 season, which saw general manager Kyle Dubas label the team a "Jekyll and Hyde" group, Toronto has turned into one of the most consistent teams in the National Hockey League in 2020-21 with wins in 18 of 24 games. The addition of vocal veterans like Joe Thornton, Wayne Simmonds and Zach Bogosian has certainly helped.

"There are shifts that don't go the way we want them to [but] the positivity we have on the bench is something that has been a lot better than it has been in recent years," Marner observed.

If the Leafs get at least one point tonight they will set a franchise record for most points in the first 25 games of a season. But no one seems satisfied.

"Sheldon's done a good job of identifying areas that we need to work on," said veteran forward Jason Spezza. "Even from game to game, and we're winning games, there's areas we feel we can clean up."

For example, the team wanted to improve its breakouts and zone exits ahead of the game in Edmonton on Wednesday.

"Probably the most exciting thing here is, despite the fact things are going very well for us as a team, the players have still allowed us to coach them," Keefe said.

And Toronto will face a new challenge tonight as, for the first time this season, they'll play on consecutive nights against a rested opponent.

"Tonight is another example of us just, you know, brushing aside what happened in Edmonton and recognizing this is a new opponent," Keefe said. "We've got to gather ourselves and put together a plan that's going to work against Vancouver and understand what type of game we'll be in for and what we expect in that sense and go out and execute all over again."

---
Keefe has done his part to make sure no one gets too comfortable. In fact, despite all the success in Edmonton, Toronto will be making a lineup change.

Travis Boyd, who had two assists last night, will sit to make room for B.C. native Nic Petan, who has been a healthy scratch in the last four games.

"If you want things to keep going and not have the lulls and the dips that inevitably come through the season, I believe a way to avoid that is to have very open and honest discussions ... but also when you change the lineup it makes sure that everybody's understanding that it's a competition and we've got lots of depth and you've got to be at your best every night," Keefe explained earlier this week.

---
​The Leafs haven't announced a starting goalie for tonight's game.

"We won't be able to make that determination until later," Keefe said shortly before noon Pacific Time.

Jack Campbell, who re-aggravated a leg injury on Saturday, skated this morning, but it's unclear if he'll be available.

"That's the biggest thing here," Keefe said. "With both Jack and Fred [Andersen] and the way things have gone for them, it really is a day-to-day thing here for us for the next little while."

Andersen returned from a lower-body injury last night, stopping 26 of 27 shots against the Oilers.

Michael Hutchinson, who shut out the Oilers on Monday, is another option. Hutchinson lost his first career game versus the Canucks in 2015, but has won all four of his games against them since then allowing only four goals.

---
Auston Matthews didn't hit the scoresheet in his return from a two-game injury absence, but the centre's wrist looked good as he fired seven shots on net and took 16 faceoffs.

"I felt fine," Matthews said after the game. "A little bit rusty, but after the first period I felt like I had my legs under me."

"Auston skated well," Keefe said. "He looked good on the power play. Their line didn't get a whole lot going at 5-on-5 other than a couple of sequences."

The Matthews line​, with wingers Thornton and Marner, was actually the only one to allow a goal against in the three-game set in Edmonton. But Keefe pointed out the goal came after Toronto had built a big lead.

"Once we get a lead like we did that line really loses its rhythm," Keefe said. "I stopped playing them as much as I normally would. I don't play them in the same type of spots I normally would so this was a tough night for players like that on our top line. I disrupted their rhythm quite a bit at even strength."

"We obviously would've liked to contribute more," acknowledged Marner, "but we were controlling the puck well. We were playing well above the puck and trying to stay above their best people."

Matthews has now failed to score in three straight games played, which is his longest drought of the season. He hasn't gone more than three games without scoring since a five-game dry spell from Nov. 27 to Dec. 4, 2019.

Matthews exploded for five goals during a three-game sweep of the Canucks earlier this season.

"There's so many good players in the Canadian Division," said Canucks defenceman Quinn Hughes. "​I knew A-Mats was one of the best players in the League, but if there's one guy I've been impressed with through this whole division it's probably him."

Marner has his own way of describing the trio of Zach Hyman, Pierre Engvall and Ilya Mikheyev.

"It's kind of a bit of a juggernaut line with the speed it has on it," Marner raved. "Three guys who can work really well, guys that are hungry for the puck with a lot of speed on the forecheck. A bunch of dogs, really. It's been fun to watch those three go to work especially those last three games."

The line has been together in the last four road games that the Leafs have played and produced a goal in all three games against the Oilers. Hyman scored at even strength in the first two games with Mikheyev getting one last night.

Earlier in the game, the soup-loving Russian got the bench going by winning a foot race with Connor McDavid.

"His legs are feeling it," observed Keefe. "The way he skates and gets on the puck, the way he closes on people ... all the sudden he’s right on top of you and gets a tick on the puck and then he gets in behind you and that surprises people. Then there's times when he gets a little bit of a step and pulls away ... You can tell he's hungry for the puck. He's hungry for opportunities to score and he puts teams on their heels."

---
Jimmy Vesey started the season on the second line with John Tavares, but dropped into the bottom six in late January. Before the trip West, Keefe warned that Vesey, now on the fourth line, was being pushed for his ice time.

With that as a backdrop, Spezza had a chat with the Harvard product ahead of Saturday's game in Edmonton.

"In some of the pre-camp skates, me and him seemed to have a little bit of chemistry and he was like, 'Let's get that chemistry back,' and it's funny how it worked out," Vesey said. "We had a great trip."

Vesey assisted on Spezza's vintage goal on Saturday and also made an impact on Monday night absorbing a cross-check to the neck from Alex Chiasson after the buzzer. The Oilers winger was suspended one game.

"Physicality is just part of the game and when the score is what it was on this trip you know the other team is going to be looking for stuff so maybe it gets me more involved in the game," Vesey said. "Sheldon's talked to our bottom six about playing a certain way and forechecking hard and making it hard on the opposition. He wants us to play like a true third or fourth line."

What is Keefe looking for specifically?

"We expect those guys to be the standard for us in terms of the execution of the systems and the structure, the competitiveness, the work ethic," the coach outlined. "They have to be really, really good in those areas ... and when we get contributions from those guys it, of course, helps and is welcome."

Vesey potted a pair of goals in Wednesday's series finale in Edmonton, snapping a 17-game drought. Both goals were assisted by Spezza.

"He's just got so much skill and sees the ice so well," Vesey said. "I mean, both of the goals were off great feeds from him."
The assists moved Spezza to 955 points in his career and put him just four back of Kirk Muller, who is 100th on the NHL's all-time list.  Spezza insists he's not caught up in that pursuit.

"I'm just trying to stay in the moment," the 37-year-old said. "The team's having success and whenever a team has success, everybody finds a way to have success. It's amazing when you win hockey games how everybody finds a way to get involved and that's what I'm a product of right now. We've played good, disciplined hockey and we have to keep going."
---
Friday will be a day off for the Leafs.