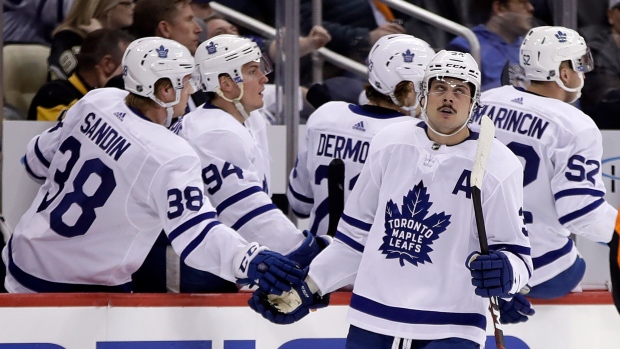 TORONTO – Fresh off a pair of embarrassing 5-2 losses, the Maple Leafs spent Wednesday’s practice focusing almost entirely on one-on-one battle drills – a clear indication of where the team thinks it must improve to pull out of its recent funk.​

“I think we all know we have the skill, but we don’t have the work ethic every single night and every single guy buying in,” said Mitch Marner. “Skill only takes you so far, and then work ethic takes you to a whole other level. That’s something we need to be consistently better with. We owe it to ourselves and to each other in this room.”

Marner’s comments echo those made by veteran defenceman Jake Muzzin following Tuesday’s loss, when the blueliner was adamant the Leafs need to start competing harder.

"Everyone has to take a look in the mirror,” Muzzin said. “We have to be better. We have to find the urgency, the passion, the love of the game, the love to compete for each other. All that needs to come. I don't know why it's not there."

At a time like this, with the Leafs clinging precariously to a playoff spot with just a two-point lead over Florida for third place in the Atlantic Division, head coach Sheldon Keefe is counting on messaging from his players to have more of an effect than anything he can share.

“I think as a coach, you can just remind them when [the work ethic] is not there,” Keefe said. “And then it’s just trusting the players. They have pride and they don’t want to have the results that we’ve had. They don’t want the games to go the way that they’ve gone. From the conversations we’ve had with the players today, [those losses were] enough to get their attention. Now we have to bring it to the ice.”

The Leafs will have to try and right the ship against the same Penguins team that sunk them on Tuesday when they welcome Pittsburgh to town for the second half of a home-and-home on Thursday.

While Keefe kept the same lineup at Wednesday’s practice as he rolled out the night before, there will be changes made before the rematch with Pittsburgh.

Earlier on Wednesday, the Leafs announced a trade with the Florida to acquire centre Denis Malgin in exchange for winger Mason Marchment in a move that will shake up Toronto's bottom six.

A smaller (5-foot-9, 177 pounds), speedy centre with good hands, Malgin’s time with Florida was marked by inconsistency. He’s skated in just 36 games this season with 12 points (four goals, eight assists) and was a healthy scratch for five consecutive contests prior to playing in Florida’s most recent win over San Jose on Monday.

Malgin wasn’t at practice Wednesday, but Keefe expects he’ll slot in right away after arriving from California.

The deal came on the heels of Keefe’s comments earlier this week about needing more out of the Leafs’ third- and fourth-line forwards, who have failed to complement Toronto’s top scorers.

Without revealing exactly where Malgin will fit, Keefe said he had heard enough good things from Leafs’ assistant coach Paul McFarland, who was an assistant with the Panthers for two seasons prior to joining Toronto, to be confident Malgin will fill a need for the Leafs.

“He gives us another NHL player, a guy that has a lot of skill that can do a lot of the things we like to do,” Keefe said. “McFarland is familiar with him and when he talks about him, he says he’s not just a small, skilled guy but he’s a competitor as well and when he’s played with good players he has succeeded. We needed a little extra depth of NHL players with skill and we think we’ve got one here now.”

Malgin's insertion will be one change for the Leafs, but Keefe is standing pat with starting goaltender Frederik Andersen.

Andersen has gone 0-3-0 with a lacklustre .835 save percentage since returning from a neck injury that cost him four games earlier this month. Backup Jack Campbell is 3-0-1 in his four starts for the Leafs since being traded from the Los Angeles Kings on Feb. 5, giving Keefe another viable option.

But Keefe is using Andersen's history as the Leafs' backbone to guide his decision making.

“[Andersen] is our guy,” Keefe said. “He’s coming back off an injury here; we need to get him back going. When this team has been at its best, it’s when Fred has been at his best. Soupy has come in here and we’ve got confidence in him, but this is a whole different situation. This is a whole different level of competition and Fred is our guy and we need him to be great.”

That turnaround needs to happen immediately for Toronto to stay in playoff position. The question is whether the Maple Leafs can find the urgency in their play to match the circumstance.

“The message in this room is that we need to elevate our play as a team and from the leadership [group],” said Auston Matthews. “Sheldon demands a lot of us and we haven’t met our expectations the last couple games. I think [that urgency] comes from every guy. That’s as simple as it gets.”