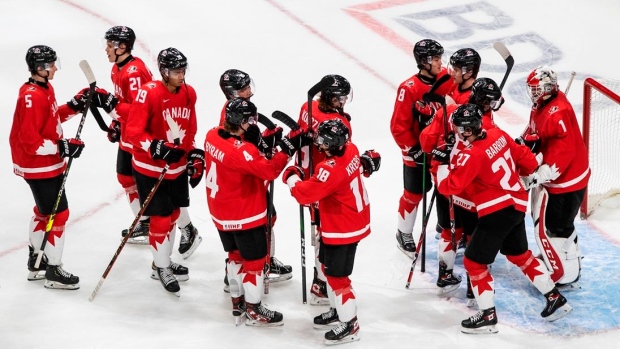 The 2021 world junior men's hockey championship had a shaky start, but Hockey Canada, the International Ice Hockey Federation and Edmonton's organizing committee pulled it off in a global pandemic.

Using the 2020 NHL playoff "bubble" in Edmonton as a template, the 10 teams arrived, played games and crowned a champion without derailment by the COVID-19 virus.

"There will be no asterisk. The competition has taken place," Hockey Canada chief executive officer Tom Renney said Tuesday before the gold-medal game involving host Canada and the United States.

"Participation of 10 teams is something that is extraordinary in every sense of the word."

The U.S. beat Canada 2-0 for gold, while Finland captured bronze with a 4-1 victory over Russia.

From Dec. 13 when the teams arrived in Edmonton, nearly 600 people lived "bubble" life walled off from the general public for 24 days, according to Hockey Canada.

Teams quarantined before and after arrival. Daily testing and temperature checks, mandatory masks off ice, wearable technology to prevent and track possible exposure and zero spectators at games were among measures taken to avoid spread of the virus.

"We wanted to finish this tournament with 10 teams. We made it," tournament co-chair Luc Tardif said.

Teams were affected by the virus and the protocols designed to stop it, however. Sweden arrived without its regular coaching staff and some top players who tested positive before leaving that country.

Germany was down to 14 skaters and two goaltenders for its first two games of the tournament.

A third of the team stayed in extended isolation because of positive tests during a mandatory five-day quarantine upon arrival. One German player was in quarantine for the whole tournament.

"I think it is unfortunate what happened," IIHF president Rene Fasel said. "We do not know what really happened with the German team as they were travelling with the Swiss and a delegation of the IIHF and then to have these 10 positive tests was really a surprise.

"On fairness, they beat the Swiss, they went to the quarterfinal and played a very, very good game against Russia.

"Hockey players are very special and when they have to take difficulties like this, they come together and really play as a team. I think it was not really harming the German team."

The world under-20 men's championship was the first top-tier IIHF tournament held in the pandemic.

The 2020 men's and women's world championships and world under-18 men's championship were all cancelled.

With the financial resources to pay for COVID-19 protocols, elite hockey has demonstrated how competitions can run in a pandemic without spread of the virus.

After going to great lengths to stage the men's under-20 championship, Hockey Canada will be under pressure to show the same commitment to the women's world hockey championship in April.

The 2020 tournament in Halifax and Truro, N.S., was postponed a year because of the pandemic.

"We feel very strongly that female athletes deserve that right as well, for us to give them the opportunity to do that as best we can. "

While the IIHF spoke of its commitment Tuesday to staging the world under-18 men's world championship in the United States in April, that tournament's female counterpart won't happen in 2021.

The women's world under-18 championship scheduled to start Wednesday in Sweden was cancelled back in September.

Attempting a world junior men's championship in challenging circumstances was worth it for hockey fans domestically and globally, Renney said.

"There's no manual on how to deal with COVID or a worldwide pandemic," he said. "We knew that all we could do was to try.

"We felt if we could do this in a manner that put the health and safety of all participants and the general public first and foremost, it would at least been a very good try and potentially breathe life into Canadians when they may have needed it most and we certainly hope beyond that worldwide.

"Even a bad plan can work if everyone commits to it. It just so happens that this one was darn good."

Canadians tuned in to watch world junior games in high numbers, according to TSN.

Canada's 5-0 semifinal win over Russia on Monday drew 2.8 million viewers, which the network said was the largest TV audience for a world junior semifinal since 2015.

Canada's games before Tuesday's final attracted an average audience of 2.3 million, which was a 47 per cent increase over last year's tournament held in Ostrava, Czech Republic.

The 2022 world junior championship has been awarded back to Edmonton and Red Deer, Alta.

Note to readers: This is a corrected story. A previous version had the incorrect title for Tom Renney