McKenzie: Lafreniere the 'clear number one' for 2020 NHL Draft

This Friday, the eyes of the hockey world will be focused on the National Hockey League’s redesigned draft lottery – the first sporting event of sorts for the league in more than three months, and a critical moment for a number of organizations vying for the top pick.

Driven by a truncated regular season and an expanded playoff format due to the coronavirus, the league had to reassess the lottery rules for fairness on a one-off basis. I encourage everyone to get up to speed on the rather substantial changes introduced by the league, but in bullet-point format, they are summarized as follows:

- The league’s bottom seven teams – from Detroit (18.5 per cent) through Buffalo (6.5 per cent) – will carry their original odds for each respective draft slot.

- The league’s next eight worst teams – we will call them Team A through Team H, ranked based on reverse points percentage from the clubs who lose in the NHL’s play-in series – will carry the original odds of the teams finishing between eighth and 15th.

- Friday’s Phase 1 drawing will award the top three picks in the draft. If all three drawings land on teams in slots one through seven, the four leftover teams will receive picks four through seven; the remaining draft lottery order will simply fall into place based on reverse points percentage after the qualifying round is played.

- If any of Friday’s drawings fall to a team in the eight to 15 range, a Phase 2 drawing will be held at a later date for those eight teams at equivalent odds (12.5 per cent per team).

- Importantly, any of these 15 teams can win the lottery.

For a team like the Red Wings – who played unwatchable, 45-point pace hockey during an ugly rebuilding season – winning the lottery is critical. But no team is going to garner more attention than the Ottawa Senators, whose further-along rebuild is keyed on picking up a couple of marquee players in this draft.

The Senators have spent three seasons bottoming out, gutting the entirety of a roster that was one goal away from reaching the Stanley Cup Final back in 2016-17. During this transitionary period (2017-20), Ottawa has played to a 67-point pace – good enough for 30th overall.

But the good news is that one of the two big, if deeply unpopular, moves the team made is now coming to fruition.

The decision to trade star defenceman Erik Karlsson to the San Jose Sharks in September of 2018 for a haul of picks and players has paid dividends on two fronts; prospects (like Josh Norris) are developing quite well, while Karlsson has battled injuries with underwhelming surrounding talent around him in San Jose.

What does that mean for Ottawa? The odds of this team landing one marquee player are quite high, but the math isn’t necessarily intuitive. Despite holding two picks, they are still competing against 13 other draws. To that end, sliding is quite likely:

There are four ways worth looking at this from Ottawa’s perspective:

- The most likely scenario is Ottawa selecting at fourth and fifth overall; this will happen 22 per cent of the time.

- Ottawa not selecting inside of the top four happens about 37 per cent of the time.

- Ottawa selecting at least once inside of the top two happens about 46 per cent of the time; they also have a 25 per cent chance of landing first overall.

- In many ways, this is what the league intended when it tried to take away the value proposition created from tanking seasons. Despite having two incredibly valuable picks, the most likely scenarios see the Sens sliding down the draft pecking order. That said, even a slide should be a boon for Ottawa. Consider those same lottery odds anchored against TSN Hockey Insider Bob McKenzie’s final draft ranking: 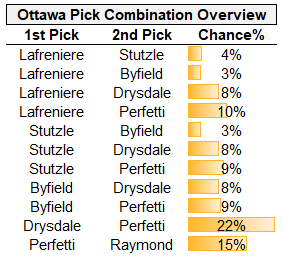 There may be few guarantees outside of Rimouski’s Alexis Lafreniere, but the top six players available in this draft are all tracking towards being impact players at the NHL level.

When you start thinking about worst-case scenarios for Ottawa, like landing two high-scoring forwards in Saginaw’s Cole Perfetti and Frolunda’s Lucas Raymond – well, you start to see why the organization is so excited about this lottery.

The upside is also captivating. The fact that the Sens have a 25 per cent chance of landing Lafreniere and a second top-five talent should be jarring for every other Eastern Conference team.

A pivotal day lies ahead for the Senators. With a bit of lottery luck, it could be an organizational game-changer.