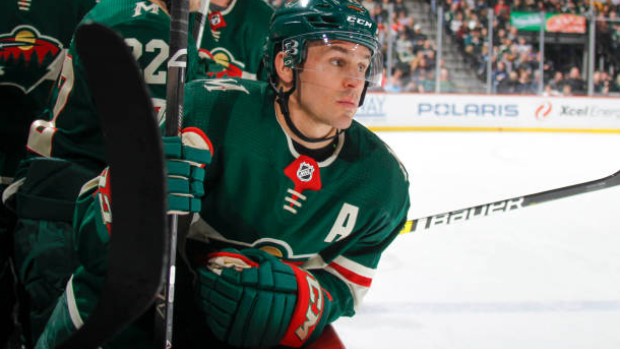 The last time the Vancouver Canucks and Minnesota Wild played back in February, Zach Parise shared the ice with Quinn Hughes for eight minutes of five-on-five play. The Wild winger came away impressed.

"He's not the biggest guy, but he can skate and wheel the net and you really have to angle him well," Parise observed. "The biggest thing I noticed about him was his ability to walk the blue line in the offensive zone, which was great. They do a lot of switches up top with their defencemen, which you don't see a lot of. The way he can pull the puck across the line, there's not a lot of guys in the league who can do it as well as he can and it makes it really tough as a winger to defend him and try and follow him all over the ice."

Keeping tabs on the rookie defenceman will be a big key for Minnesota if the National Hockey League season resumes. The Wild are slated to face the Canucks in a best-of-five play-in series. Minnesota took two of three from Vancouver this season and have won five of seven meetings dating back to last year.

"They have a really good group up front, good offensive guys and a really good goaltender," Parise noted. "Their goalie [Jacob Markstrom] made some really big saves against us so I think that will be a challenge. Their D are mobile and like to jump in the rush and attack with four players. We had some really good games against them and it should be a good match-up."

Parise, who led the Wild with 25 goals this season, spoke to TSN via Zoom this week from his home in Minnesota. Parise shared insight on the changes made by interim coach Dean Evason and explained how Kevin Fiala took his game to the next level. The 35-year-old also offered his perspective on the unrest in his hometown following the death of George Floyd.

The Wild won eight of 11 before the pause, what changed under interim coach Dean Evason?

"Before the change we had started to play pretty safe and were almost guilty of playing too low-risk. When Dean came in, he wanted to put that confidence in our ability back into us. We talked a lot about playing faster and playing more with the puck, making more plays with the puck. If the play is there, make the play and if you turn it over then back-check and come back. It was a little more freedom to try and make stuff happen on the offensive side of the puck and getting our defencemen more involved off the rush ... we spent a lot more time in the offensive zone and we were defending way less and it seemed to be a better formula for us."

Fiala produced 14 goals and 26 points in the final 18 games of the regular season, what stood out about the way he was playing down the stretch?

"He was playing dynamic. I think having that experience of playing for Dean in Milwaukee [of the American Hockey League] helped. You could tell Dean had a lot of faith in him and gave him a lot more opportunity and he took it and ran with it and it was fun to see. When we traded for him last year, you could tell he was a little uncomfortable with a new team and new setting and this year, especially after the coaching change, he really took off and started to play with a lot of swagger and making plays all over the ice and scoring some highlight-reel goals. The ability he has was starting to show. He was getting opportunities and taking advantage."

The perception is you guys are more defensive-minded and the the Canucks are more offensive-minded. Traditionally, early-season games tend to be looser and higher scoring. Do you expect things to be that way if the play-in round gets going this summer?

"I hope so. It makes for entertaining hockey and fun hockey to play. At the beginning of the season there's more mistakes, guys are still in summer hockey mode. I hope for entertainment value and for everyone tuning in that you see mistakes, things opening up, a lot of offence, because that's a fun way to play."

So, I'm guessing you don't think it will be an advantage for either team?

"It'd be the same for both teams. At the end of the day, you want to play to your strengths and try to exploit the other guys' weaknesses. I think we have been known as being a pretty good, sound defensive team so that's something we'll have to pay a lot of attention to especially against those guys with how well they play on the offensive side and the creativity they have up front. We can't afford to leave our defencemen out to dry. We have to make sure that we play with our structure in the defensive zone."

Minnesota has nine players over 30, including yourself. How do you think the long layoff will impact older guys?

"I don't see age making much of a difference. I mean, everyone's kind of experimenting, because no one really knows when this is going to happen. It just depends on what you've been doing and how prepared you are when you come back regardless of how old you are. Maybe for us older guys the break came at a good time [smile] and got us some rest."

#Canucks 3-in-3: Vancouver will face off with the #MNWild in the play-in round if and when the #NHL resumes...

Where do they have the edge and what could be their downfall?

What do you recall about the challenges of playing high-stakes hockey right out of the summer at the 2016 World Cup?

"It was tough. Our first exhibition game, right away coming out of pick-up hockey, was playing Canada and you hop right into that rivalry. The pace right away, you’re on the bench sucking wind for a little bit, it was tough. It took a game or two to get back adjusted to that pace of play. With the regular season you have those exhibition games where it's not the pace of Canada-U.S. so you can ease into it a little bit, but you won’t have that luxury now. It's going to be dropping the puck and basically playing playoff hockey right away."

Minneapolis/Saint Paul and Vancouver are both in the mix to be a conference hub when the NHL returns. What type of advantage would it be to play at home?

"There's just so many unknowns. Would we be able to stay in our homes or use our dressing room? They're trying to make this thing as even as possible. When you throw out the element of fans ... I'm not sure how much of an advantage you'll have."

From @rayanddregs: @rayferrarotsn & @DarrenDreger discuss what life might be like for players in hub cities, why that could make or break a return to the ice and Jack Eichel’s growing frustrations in Buffalo - https://t.co/dCNCBtf6w4#TSNHockey pic.twitter.com/BEUwDvoDaX

We expect Phase Two to start some time next week with players getting together in small groups. What are you looking to accomplish during this part of the return-to-play process?

"Well, as best you can, you want to get back into skating shape. All players will tell you that it's so tough to replicate that when you're not skating. We can bike, run, do everything you want, but until you're skating and getting into that little physical contact, it's tough to get into hockey shape. You have to incorporate a little physicality into the practice as best we can and get the hands back and get that conditioning to a level where we can play in that playoff atmosphere."

Obviously, we have a long way to go before games resume. What questions do you want answered from a health and safety standpoint moving forward?

"There's so many, it's hard to think of one. There's a lot of questions about family. What if someone at home is sick? Can we leave the hub city? And then when we come back are we quarantined? There's things like that that everyone needs some answers on. As far as being around the locker room and on the bench, it's almost like you don't know how to act anymore. Everything we're accustomed to doing every single day, you have to think twice about now. I think there's a lot of stuff that the [Players' Association] and League are going to hammer out and try to figure out and try and get this thing going when we can."

Parise on situation in Minnesota: 'It's a scary time right now,' via @markhmasters.

What is your perspective on what's happening in Minnesota right now?
(Note: This interview was conducted on Friday afternoon.)

"It's scary. It's a scary time right now. Some horrific videos. That video that came out with George Floyd, I mean, you don't really know how to put that into words. And now seeing what's happened to Minneapolis and Saint Paul with the rioting and the looting and the fires, I mean, it's scary times. You hope they'll get it under control as soon as possible. The police are doing everything they can and the best they can and we support the job that they're doing and getting everything under control. I know the National Guard is here now. We hope that people, if they want to protest, protest peacefully and hopefully we can put an end to the riots."

If some Wild players want to get involved with the discourse that will follow this situation, how would that be received in the dressing room?

"Well, we're all entitled to our opinions and mine might differ from yours, but that doesn't mean we can't talk to each other. You know, we can all have a conversation and talk about it and it's okay if we don't agree, it doesn't make you a bad guy, doesn't make me a bad guy. At the end of the day, we all want everyone to be safe and we all want everyone to feel safe and we don't want people to be losing their businesses, losing their buildings, losing their housing and that's what's happening right now and we just hope that can all come to an end."