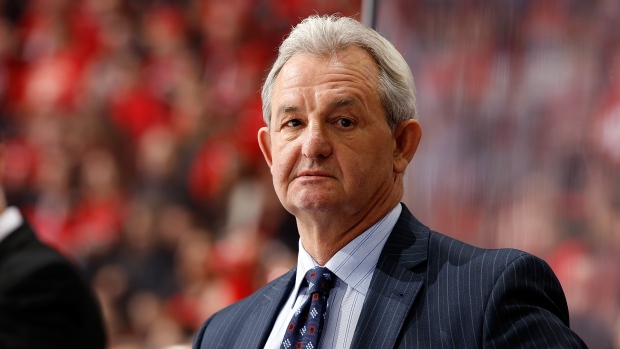 Darryl Sutter joined the Calgary Flames on ice Tuesday for the first time since being hired, setting the tone with a bag skate 35 minutes into his first practice.

The new head coach, who joins the Flames for his second stint behind the bench, drew praise following the skate.

"Definitely the best practice we've had in a while," said Chris Tanev.

"All business, no messing around," added Matthew Tkachuk.

We will have coverage today from the practice on SportsCentre & That's Hockey.

Sutter mixed up the team's lines, though it's unclear how permanent the changes could be with Sam Bennett and Mikael Backlund both absent from the session. The Flames said Bennett is day-to-day, while Backlund skated earlier and missed the team session due to a family matter.

Sean Monahan and Johnny Gaudreau were joined on a line by Brett Ritchie, who has appeared in just five games this season.

Ritchie, signed as a free agent in January, has one goal and two points this season. The 27-year-old scored a career-high 16 goals and posted 24 points with the Dallas Stars during the 2016-17 season.

Early on, it's Brett Ritchie who will play with Johnny Gaudreau and Sean Monahan.

Ryan Huska served as the Flames head coach in their past two games after Geoff Ward was fired last Thursday. The Flames lost both games, picking one point in Sunday's shootout loss to the Ottawa Senators.

Calgary currently sits sixth in the North Division with an 11-12-3 record, four points back of the fourth-place Montreal Canadiens with two more games played.