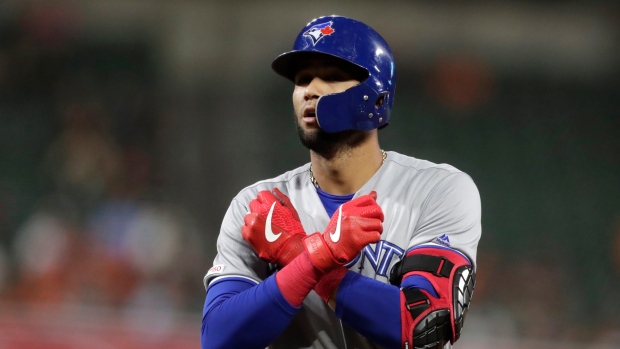 DUNEDIN, Fla. — The last time we took a look at how the Toronto Blue Jays opening day roster could shake out it was mid-January and the picture was far from complete.

Six weeks later, there’s clarity in a number of spots, with a handful of bottom-of-the-roster job battles just getting started.

After failing to find a significant upgrade in centre field, Jays’ brass decided to shift Randal Grichuk to the middle of the grass on a more permanent basis, something they were hesitant to do last season after Kevin Pillar was traded.

That kicks Teoscar Hernandez over to right field, where he’ll be a near everyday option in the early going.

Jays GM Ross Atkins also added some bullpen depth, as well as a handful of names to the infield mix in the time since we last projected what group will be in Toronto for opening day against the Boston Red Sox on March 26.

Other than McGuire getting in trouble with the law for exposing himself in a parking lot in the days leading up to camp starting, not a lot has changed here.

McGuire is playing in spring games and has a March 16 court date in Clearwater, but the expectation is that he and Jansen will still start the season as the tandem behind the plate.

There is some thought the Jays could try to trade McGuire after the misdemeanour is settled, which would give 33-year-old veteran Caleb Joseph the backup job and Jansen more of a workload as the full-time starter.

The Jays aren’t going to give McGuire away, but the charge didn’t go over well inside the organization.

Kirk is impressing the coaching staff in camp – they think he can catch full time despite the obvious conditioning work needed – but he hasn’t even had an at-bat above High-A, so he’s just a name to remember down the road if he’s raking at Double-A New Hampshire.

The most interesting name added to the mix is Joe Panik, a 29-year-old veteran with a career .271 batting average and a 97 wRC+ that has made him about league average offensively over the course of his six seasons.

Panik has been strictly a second baseman in the majors, but he’s been reminding everyone that he was a shortstop in the minor leagues before being shifted to the keystone due to the presence of Brandon Crawford in San Francisco.

He has a great shot to make the club if he shows the ability to handle short from time to time and chip in with the bat as a high-contact hitter from the left side of the plate.
If that happens, it’s Tellez, Drury, and outfielders Derek Fisher and Anthony Alford as the favourites for three roster spots.

Those final decisions will come down to how manager Charlie Montoyo wants to configure his bench and which players the front office values because Fisher and Alford are both out of options and will have to be exposed to waivers.

Espinal was added to the 40-man roster in the off-season and homered against the New York Yankees on Tuesday.

File his name away for when injuries inevitably strike because he can capably play short, second and third.

We’ve hit on most of the outfield movement above, but one wrinkle the Jays are considering is using Gurriel at first base against left-handed pitching, which could affect bench construction.

Gurriel has crushed lefties in his young career, and Blue Jays decision-makers believe his infield experience and hands would work at the position he started at once last season, while also mitigating the throwing issues that cropped up when he was playing second base.

If Alford stays healthy – that’s a big if for him – and continues to steal bases this spring, he’ll be a lock.

Davis missed the first eight days of camp due to the birth of his baby, but the defensive specialist was expected to show up this week.

More health issues quickly cropped up for Borucki early on in camp and he was shut down for 10 days with tightness in his left elbow.

The 25-year-old played catch on Monday, but with the lefty way too far behind from a workload and readiness perspective, Montoyo has already publicly ruled him out of the competition for the final rotation spot. If Borucki can get past the latest elbow issue, he could be an option down the road in April or May, however.

Thornton is now the clear-cut favourite to win that job, and the trickle-down effect of that decision will impact the bullpen mix.

Yamaguchi is still competing for a rotation spot, but there are reasons that the 32-year-old right-hander will likely end up in the bullpen if everyone is healthy.

The only thing that will change this picture at this point is an injury.

Dolis, who had four excellent seasons in Japan, was given a major-league deal in late January and is expected to be an important part of the setup mix with a new splitter he didn’t have the last time we saw the 32-year-old in the majors.

Giles, Dolis, Bass, Yamaguchi and Gaviglio lock up five of the eight spots, leaving a glut of arms competing for the final three jobs in Montoyo’s bullpen.

Spring training results don’t matter for many on the roster, but this is an area where a lights-out spring will change minds.

Of the non-roster invitees, Cole has the best chance to win a job, while Pannone’s shift to the pen has allowed his fastball to tick up into the 92-93 mph range, making him the favourite amongst the five left-handed relievers in camp.

Don’t rule out more names to be added to this mix, especially after the Jays plucked Daniel Hudson off the scrap heap on March 25 last year.

Hudson would go on to fetch the Jays a prospect at the trade deadline, before closing out the World Series for the Washington Nationals.

That’s how unpredictable bullpens can be.