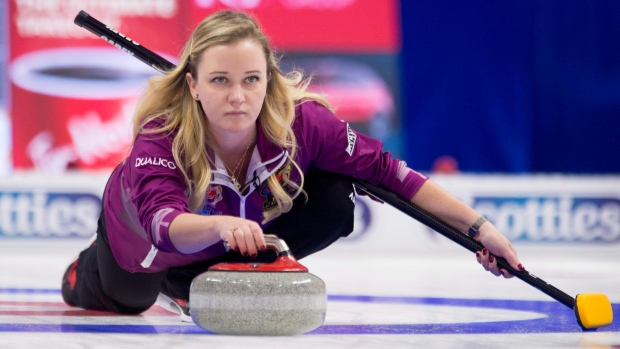 As the sports world, including the game played on the pebbled ice, comes to a screeching halt due to the novel coronavirus (Covid-19) pandemic, curling has stayed in the news thanks to the somewhat surprising slew of roster moves.

With less than two years away from the 2021 Roar of the Rings Olympic trials, most rinks have their rosters set and are ready to make a run for the top of the curling mountain. This year is a little different, however, with some elite-level squads announcing changes following the cancellation of the men’s and women’s world curling championships last week.

Here’s a look at the changes in the world of curling since Brad Gushue raised the Brier Tankard less than two weeks ago.

The move caught many off-guard including Weagle, who told The Canadian Press she wasn’t part of any discussions when it came to her leaving the team after an 11-year run which saw three Scotties championships, one world title, numerous Grand Slam victories and an appearance at the 2018 Olympics.

Weagle was replaced by Sarah Wilkes, who just a couple days prior announced she was leaving Team Chelsea Carey after a solid run which saw them win the 2019 Scotties, beating Team Homan in the final.

Wilkes played third for Carey but will throw second rocks for Homan as Joanne Courtney gets bumped down to lead.

It’s debatable whether this move makes Team Homan better on paper, but it’s obvious the rink out of the Ottawa Curling Club feels like it does. We’ll have to wait and see if they’re right.

The odd part about this move was that Team Jones didn’t depart with any player already on their roster. The Winnipeg-based rink will serve as a five-player rink next year. At the Scotties or Brier and other major events, teams will usually bring an alternate or fifth player, but they rarely see any meaningful playing time.

This doesn’t seem to be the case for the new-look Team Jones as their legendary skip seems to want to use Weagle in more of a productive way.

"We weren't sure if we were going to add somebody this season or not because we were trying to figure out who that might be," Jones told the Canadian Press. "Then Lisa became available and it just filled all the check marks on our list.

"It almost felt too good to be true for us. We were super excited about it."

It will be interesting to see how this team ends up working out on the ice, but it’s safe to say Team Jones now have two of the best leads to ever play the game in Weagle and Dawn McEwen.

Additionally, Jones and Homan are still Canada’s best curling rivalry in the women’s game today. And whether the players involved would like to admit it or not, that rivalry probably got a little spicier with Weagle’s move.

Rundown: Team Silvernagle has represented Saskatchewan at the Tournament of Hearts the past two years, thanks in part to the addition of veteran third – and former skip – Stefanie Lawton. However, the 39-year-old decided to step away from the game at the conclusion of this season, meaning the North Battleford crew needed a new vice.

Streifel has skipped rinks in Saskatchewan for almost a decade and finished with a 2-5 record at this year’s provincial playdowns.

Despite losing Lawton, Team Silvernagle are still probably the favourite to win the prairie province in 2021.

With the rest of her teaming disbanding, two-time Scotties champ Chelsea Carey is currently without a team.

Carey, 35, lives in Calgary and has played for Alberta since 2014 but was born in Winnipeg and can play for a Manitoba-based rink if she desires. Interestingly, the front-end duo of Leslie Wilson-Westcott and Raunora Westcott, both based in Winnipeg, recently announced they want to return to prime time curling and are looking for a third and skip to make it happen. The pair captured silver at the 2017 Tournament of Hearts, playing for veteran Michelle Englot.

Carey, Wilson-Westcott and Westcott, plus an import to play third could conceivably join forces and play out of Manitoba. It would make an already stacked province that much deeper, but it might be Carey’s best option to find a competitive team.

Back together again! ❤️ #Curling
Leslie and I have been through so many great battles on the ice over 15+ years together & have accomplished so much.
We are ready to get back at it next season as she is completing her Masters degree this summer! pic.twitter.com/5yNaFt6agM

Rachel Brown and Dana Ferguson have played together for nearly a decade, losing in the 2014 and 2015 Scotties finals as members of Val Sweeting’s team before finally getting over the hump with Carey in 2019. If they continue to play next season, there’s a good chance it will be together. The question is, where do they go?

Another interesting free agent is Jamie Sinclair, who has skipped in the United States for the past five years. The three-time national champion has Canadian citizenship, having grown up near Ottawa and helped Rachel Homan win gold at the 2007 Canada Winter Games. Is joining a Canadian rink in this curler's future?

Rundown: John Morris is back and he’s in pursuit of a third Olympic gold-medal in curling.

Team Kevin Koe won the 2019 Brier but struggled this season on the World Curling Tour, capping it off with a missed playoff appearance at the Tim Hortons Brier earlier this month.

The Calgary rink decided to part ways with second Colton Flasch and bring aboard a familiar face in Morris. The 41-year-old has taken the last two years off from traditional curling and brings three Brier Tankards, a world title and two Olympic gold medals to Team Koe.

Morris and lead Ben Hebert played together for seven years under Kevin Martin from 2006 to 2013, with the highlight coming at the 2010 Winter Olympics, finishing first on home soil in Vancouver. Morris also skipped Koe for a few seasons in the mid 2000s before joining Team Martin.

Morris has played third and skip in his career, so second will be a new experience for him in 2020-21.

Will this change pave the way to a second straight Olympic appearance for four-time Brier champ Koe?

Flasch is now a free agent and will hope to find a team in the hunt for the 2021 Olympic trials in Saskatoon.

Note: Alex Forrest has decided to step away from curling to focus on family life and work.