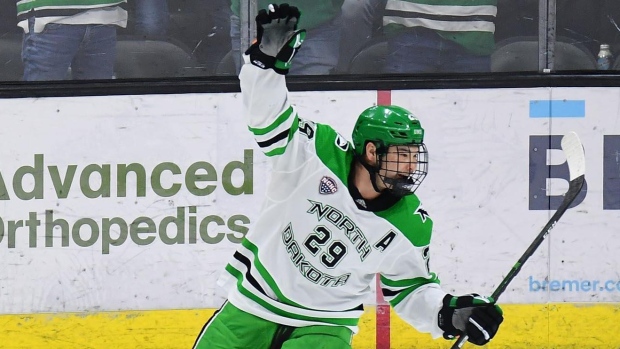 Canadian forward Jordan Kawaguchi is one of the three finalists for this year's Hobey Baker award, given annually to the top player in NCAA men's hockey.

Kawaguchi, from Abbotsford, B.C., had 15 goals and 30 assists in 33 games while helping the North Dakota Fighting Hawks to the NCHC regular-season title, which was awarded after the season was ended March 12 due to the coronavirus pandemic.

Kawaguchi was named the NCHC's forward of the year and was a finalist for the circuit's player of the year. His 15 multi-point games ranked second in the NCAA.

University of Minnesota Duluth defenceman Scott Perunovich and University of Maine goaltender Jeremy Swayman are the other finalists. The winner of the award will be announced April 11.

This report by The Canadian Press was originally published April 2, 2020.