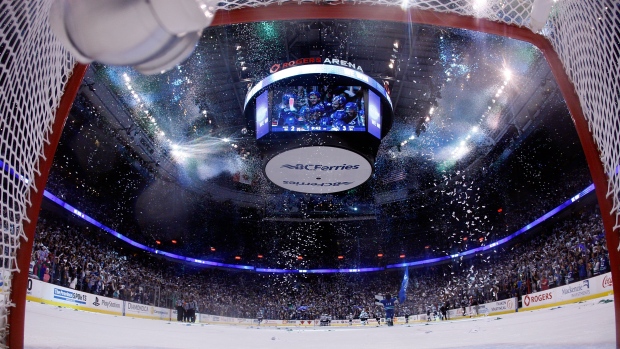 NHL teams have stopped using roof-mounted air cannons that shoot confetti inside arenas after a teenager allegedly suffered traumatic brain trauma when a part from an air cannon fell from the roof and hit him in the head.

Davis Baynton was with his parents attending an NHL game in Vancouver on May 24, 2011.

Just as the game between the Canucks and San Jose Sharks ended, "air cannons located near the roof of the arena projected confetti over the hockey rink and spectator stands," says a lawsuit that was filed by the Baynton's parents and obtained by TSN. "A barrel fell out of an air cannon and struck the plaintiff on the head..."

The lawsuit, filed in B.C. Supreme Court, alleges the teenager, who was 15 at the time of the alleged incident, has suffered traumatic brain injury, post-traumatic amnesia, and other cognitive issues.

It's unclear whether NHL teams have formally been advised about the incident and the potential dangers of air cannons, or whether news of the accident has spread to other teams through informal word of mouth.

Several Canadian-based NHL teams, including the Oilers, Jets and Canadiens, said they have never used the cannons. A league official said he believed that the use of roof-mounted cannons has been given up.

The Baynton family, who are suing the Canucks, the team's owners, and Hollynorth Production Supply, the company that supplied the air cannons, have not filed documents that indicate how much money they are seeking.

"This was a serious and unfortunate incident," said Victor de Bonis, the Canucks' chief operating officer. "Our immediate concern was for Davis's health and well-being, which remain the most important considerations today. The safety and security of our guests is always the highest priority for our organization. We sincerely wish Davis and his family well."

Hollynorth Production has filed a cross-claim against the Canucks, alleging that if the Baynton family is successful at trial, the Canucks should be responsible for paying any damages because the team "altered the air cannon, its components and its accessories, by modifying it or moving it, following the proper installation of the air cannon at the premises."

Mike Kaerne, an executive with Hollynorth, wrote in an email to TSN, "Normally I would be happy to respond to your questions, but as you must be aware, I am required by our insurance company not to comment on the allegation. Surely you can find something more worthwhile to report on."