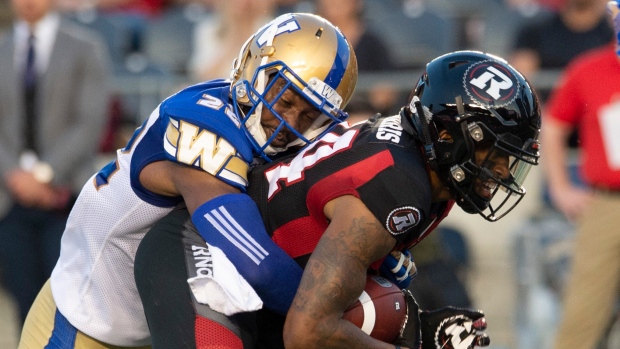 Trump mistakenly tagged the Ottawa Redblacks receiver in a tweet Friday stating: "You go around Pennsylvania and you see Trump signs everywhere. The Donald Trump situation is bigger than the Reagan Revolution. Donald Trump has inspired us," and tagged @RjHarris15, the handle for the CFL player, in the tweet.

“You go around Pennsylvania and you see Trump signs everywhere. The Donald Trump situation is bigger than the Reagan Revolution. Donald Trump has inspired us.” @RjHarris15 WHP580

That brought a quick denial from the Redblacks.

"We can confirm that @RjHarris15 was mistagged in this tweet," the CFL club said.

Harris responded by tweeting: "I gotta get back to Canada yo."

The CFL player also tweeted a link to a football game he's running next month. And later, the Redblacks posted a video on Twitter of Harris outlining Trump's miscue.

"I'm getting blown up with all of these notifications," Harris said. "So I'm like, 'I've got to post my camp flyer immediately . . . and get some more followers for the camp. Sure enough, it got retweeted a lot, it got a lot of likes.

"Just so you all know that was not me, that was a different R.J. Harris that said that. Trump just mistakenly tagged me for that tweet."

But that didn't stop Ottawa kicker Richie Leone from chiming in.