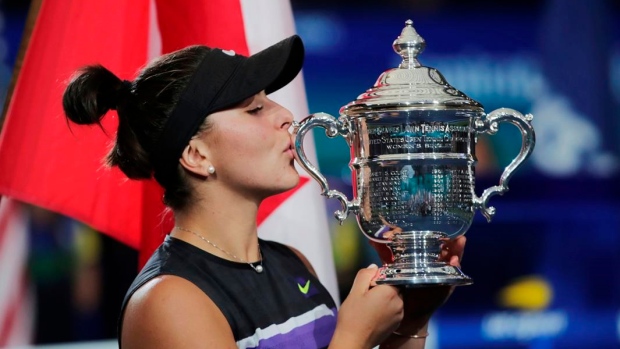 Tracy Austin didn't experience the same level of fanfare after winning the 1979 U.S. Open that Bianca Andreescu did for her history-making victory at Flushing Meadows this year.

But the former World No. 1 and three-time Grand Slam champion knows what it's like to be a teenage tennis star — and how life can change instantly following a major title.

"It really is life-changing."

Andreescu is back in action at the China Open for the first time since beating Serena Williams for the U.S. Open championship nearly three weeks ago.

That break in the teenager's schedule followed a whirlwind champions tour where she appeared on talk shows in both Canada and the U.S., and returned home to a hero's welcome with a rally in her hometown of Mississauga, Ont.

Austin also did the talk-show circuit following her U.S. Open wins, but the immediate aftermath of her first title was a little less glamorous than Andreescu's.

She recalled finishing up her post-match press conference, then jumping in a car with her mother to drive her brother to JFK airport so he could get back to Los Angeles for law school the next day. After that, they stopped at McDonalds, with Austin still in the dress she wore to win the title.

"That was my celebratory dinner there," Austin said with a laugh. "Everyone was like 'didn't we just see you win the U.S. Open?' and I was like 'yeah, but quarter-pounder with cheese please.'"

Austin, who handed out the trophy to Andreescu in New York on the 40th anniversary of her own victory, has been following the Canadian's "meteoric rise" all season.

Her own ascent to tennis fame felt less instantaneous than Andreescu's — Austin was on the cover of Sports Illustrated as a 13-year-old and had wins against Evert and Navratilova by the time she was 15 — so reaching the '79 U.S. Open final as a 16-year-old didn't feel like that much of a leap.

Andreescu, meanwhile, started this season ranked outside the top 150 and hadn't beaten a top-10 opponent before 2019. She's 8-0 against them now.

"That's an incredible stat to me," Austin said. "That just does not happen. Usually ... it's a slower progression but with her it's been absolutely meteoric.

"The ranking at the start of the year, to winning the U.S. Open, and in the middle of it missing four or five months (with a shoulder injury), I've never seen anything like it."

Austin said Andreescu's decision to take three weeks off before competing again will only help her close out the season strong.

She compared Andreescu to 2017 U.S. Open winner Sloane Stephens, who played almost immediately after winning that title — also her first at a Grand Slam — and promptly went on a lengthy losing streak.

"I think it was extremely smart of Bianca's team to say 'you know what, you've gone through a lot,'" Austin said.

"Without a doubt (fame) does come in a big wave after winning a Grand Slam because there's more of a demand on your time, and that's where you have to have a team around you that understands you — because you still have to then get back to playing tennis. ... The journey has become more complicated for her but her goals are the same."

While Andreescu had won two other tournament titles this year — including the Rogers Cup in Toronto in August — her U.S. Open championship launched her into another stratosphere on the Canadian sports landscape, and to No. 5 in the women's rankings.

She had a street named after her in Mississauga, met Prime Minister Justin Trudeau at her rally, and received loads of congratulatory messages from celebrities, including Shania Twain and Drake.

Former World No. 4 Brad Gilbert, who coached Andy Roddick to the U.S. Open championship in 2003 when Roddick was 21, wasn't worried that Andreescu's hectic off-court schedule would become a distraction.

"I'm not going to sit here and tell her what she can and can't do because her life is forever changed now from a couple months ago," the ESPN tennis analyst said in a recent phone interview. "If you look at the last couple years, the only (negative) she's had is injuries. So that's more of a concern than anything else.

Gilbert couldn't recall the level of enthusiasm Roddick received after winning the U.S. Open, his first and only Grand Slam championship. But the context to that victory was much different than the 19-year-old Andreescu's historic win, which made her Canada's first major singles champion.

"There was no social media yet, things (didn't have) the gravity they do now," the 58-year-old said. "And the United States had a lot of Slam winners. She's the first Canadian to win a Slam so it's (takes on) a completely different gravity."

Gilbert picked Andreescu to win the U.S. Open when the draw was revealed the Friday before the tournament. Austin started saying Andreescu could win in New York after seeing her take the Rogers Cup in Toronto.

And both analysts believe Andreescu is just getting started.

"She's got the will and the determination of a champion and you just can't break her down," Austin said. "Her athleticism is fun to watch ... And she's got variety. She does things that keeps her opponent guessing."

"If she had been healthy all year she'd be No. 1 in the world right now," Gilbert said.

"When she's playing she's just completely dominating. And that's an amazing sign for someone her age."

This report by The Canadian Press was first published Sept. 29, 2019.