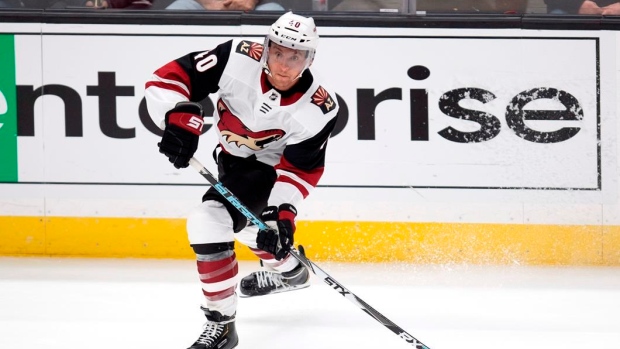 The Arizona Coyotes placed Michael Grabner on waivers Saturday for the purpose of buying out the speedy forward's contract.

He had one year left at $3.775 million in salary and a cap hit of $3.35 million. Assuming Grabner clears waivers Sunday, the buyout will cost Arizona just over $2.5 million, trim money off the books next season and cost an extra $1.26 million in 2021-22.

“This was simply a hockey decision,” new general manager Bill Armstrong said. “Michael is an incredible person and a beloved teammate. He is the consummate professional, and we appreciate everything he's done for the Coyotes organization.”

Grabner, 32, had 11 points during the shortened regular season and three goals in nine playoff games. He signed this deal coming off a 27-goal season in 2017-18.

If Grabner chooses to play in the NHL next season, he could join his sixth different organization after spending time with the Vancouver Canucks, New York Islanders, Toronto Maple Leafs, New York Rangers, New Jersey Devils and Coyotes.

Arizona is in the midst of a front office upheaval despite qualifying for the expanded, 24-team playoffs and technically winning its first playoff round since 2012 to reach the traditional first round of 16, also for the first time since 2012.

John Chayka stepped down as general manager a week before the post-season began, and the Coyotes said he “quit” on the team. The league a month later stripped Arizona of its 2020 second- and 2021 first-round pick for violating the scouting combine policy by conducting physical tests of draft-eligible players.

Owner Alex Meruelo and CEO Xavier Gutierrez — hired in June to replace Ahron Cohen after he and the team parted ways in May — tabbed Armstrong to succeed Chayka after winning the Stanley Cup in 2019 as assistant GM of the St. Louis Blues.

Armstrong now has a major challenge in front of him running hockey operations for a small-market franchise in a pandemic without a pick in the first three rounds of the draft next week and no first or third in 2021.

Buying out Grabner is one step toward shedding some salary, and more moves could be coming. The names of captain and top defenceman Oliver Ekman-Larsson and starting goaltender Darcy Kuemper have been involved in trade rumours in recent weeks.