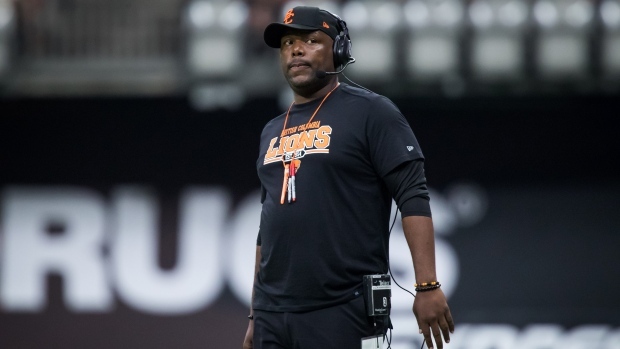 VANCOUVER — The B.C. Lions fired head coach DeVone Claybrooks on Wednesday, a few days after the team completed a disappointing 5-13 season with a 21-16 loss to Calgary.

The Lions missed the CFL playoffs and finished last in the West Division standings. There was no immediate word on a replacement.

Hervey and team president Rick LeLacheur were scheduled to hold a media availability later Wednesday at the team's practice facility in Surrey, B.C.

"We thank DeVone for his time and dedication while also wishing him the very best in the future," Hervey said. "This decision was difficult, but we will continue to do everything possible to reach and exceed the standards we have committed to within our organization."

The Lions struggled from the start of Claybrooks' rookie season as coach, posting just one win in their first 11 games. B.C. did not beat a team from the West Division all season.

When the players cleaned out their lockers on Monday, Claybrooks said he was not concerned about his future.

"I just do my job and until someone tells me I don't have one, I'll keep doing it." he said.

"I'm not happy with the results obviously because it's a results-based business," Claybrooks added. "But I'm happy with the foundation that we've laid, to know that we trust and feel and believe that we're going to get the results."

The Lions hired Claybrooks last December, ending his seven-year run on Calgary's coaching staff. He spent three seasons as the Stampeders' defensive co-ordinator and went out on top as the team won the Grey Cup last fall.

Claybrooks replaced Wally Buono, who retired at the end of the 2018 season after 46 years in the CFL.

A 42-year-old native of Martinsville, Va., Claybrooks spent 11 years playing defensive tackle in the NFL, CFL and in Europe.