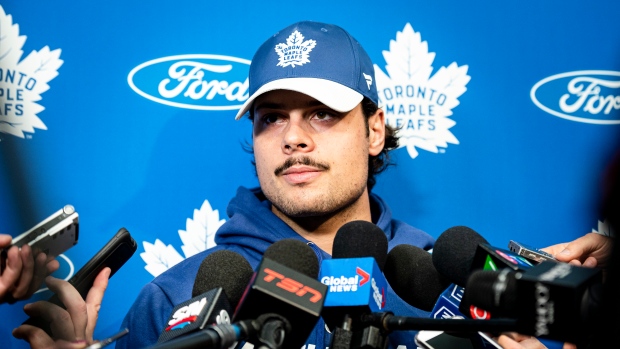 TSN Toronto reporter Mark Masters checks in daily with news and notes on the Maple Leafs, who held a practice and two scrimmages​ on Friday at the Paradise Double Ice Complex in Paradise, NL.

Who will be the next captain of the Toronto Maple Leafs?

"Great leaders in different aspects," observed Jason Spezza, who served as the Ottawa Senators captain in the 2013-14 season. "Morgan's been here for a long time, he knows how to deal with playing in Toronto, he's produced for a long time. Auston's just a flat-out superstar that is going to get better and better and get more mature as the years go on, he's in a great place and Johnny's just a consummate pro. Those three guys are all capable of being leaders and regardless of who they name captain I think they're always going to have to have each other to lean on and they’ll all be here for a while together."

Babcock has coached some of the greatest leaders in this generation of hockey, but when asked what he's looking for from the next Leafs captain, the veteran bench boss highlighted an example in a different spot: Kawhi Leonard, who led the Raptors to their first NBA title in June.

"He came into town and he changed things overnight with an unbelievable demeanour, with stick-to-itiveness like I haven't seen," Babcock gushed, "with a competitive edge, not bothered by much, left all his talking to his play and they end up winning the championship and I thought he made the team better around him and, to me, that’s leadership. That's what you do and you bring it every day.

"The determination, the love of being a Leaf, the love of the city, the love of your teammates, the willingness to share yourself are all critical parts of being a captain. I'm not a huge basketball (fan), but when I went to those games during the year I was so impressed with Kawhi it’s not even funny. His competitiveness, he dragged other guys into battle. It was something to watch and I think we have people capable of doing that."

Toronto Sun columnist Steve Simmons expects Matthews, the first overall pick in the 2016 NHL draft, to be named captain once the team returns home. The Arizona product seems to be the logical choice for many based on his face-of-the-franchise status and the productive start to his NHL career.

"Definitely Auston's been more and more vocal," said goalie Frederik Andersen. "He's a guy that demands and deserves a lot of respect in the room and I think you see it around the team that guys respect him a lot ... He demands the puck a lot and demands to score. When he's on the ice it’s almost like it’s his puck sometimes and he wants it to be in their net so not a lot of players can be like that."

Matthews has also grown more comfortable expressing himself off the ice. His new moustache, for example, created waves and he isn't shy talking about it.

"Everyone keeps asking me if I'm keeping it and I just tell them, 'For now I am,'" he said with a grin.

"It looks good on him," a chuckling Andersen said. "Obviously, he loves being a little bit different and standing out a little bit so it's fun having something extra to talk about."

Matthews brings a certain swagger to the team and has made no secret that he feels ready for a bigger leadership responsibility. Spezza outlined the challenge Matthews or anyone else would face in taking over the role.

"There's a big responsibility," the 36-year-old centre said. "You have to be maybe a little more aware of all the other guys in the room and how they're feeling, you can't just always think about how you're playing, how you're feeling, you have to look around the room and pick guys up when they're down and help guys out, but other than that you don't change too much. You rely on a leadership group to kind of get things done ... and then there's a relationship with the coach and you have to be able to carry the coach’s message to the room.

"A lot of teams go to leadership groups now where you still have a captain and assistants, but the whole group is in there at the same time talking a lot ... I'd say times have changed a little bit with a lot of younger captains in the league now."

Matthews, who will turn 22 next week, isn't worried about any added pressure that may come with the 'C' noting the team handles issues as a leadership group. So, how would he describe his leadership style?

"I just go about my business and let my play and my actions do the talking," Matthews said in Kawhi-esque fashion.

Matthews skated with Andreas Johnsson and William Nylander on Friday. He likes what he sees from Nylander, who missed last year's camp due to a contract dispute.

"It's no secret, the whole fiasco last year and then obviously coming in late," Matthews said, "so I definitely see motivation and kind of a hunger in his attitude and his confidence. He's a confident person to begin with, but coming in this summer and this training camp he looks really good out there and seems extremely hungry."

"It's great to be here," Nylander said. "You get into the rhythm of the game, the systems and you’re playing [pre-season] games here. And then you’re going right into the season [ready]."

TSN's Kristen Shilton has more on Nylander's plans to dominate this season here:

Note: Tavares became a first-time father on Wednesday and has stayed behind in Toronto to be with his wife and newborn. Zach Hyman (knee) and Travis Dermott (shoulder) have been skating on their own.