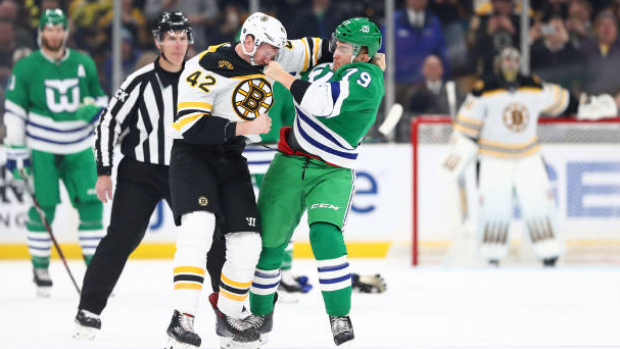 Veteran forward David Backes has fought in three of his last four games, adopting an enforcer role for the Boston Bruins.

“You have to stick up for your teammates,” Backes said after Tuesday night's game where he fought Carolina Hurricanes forward Micheal Ferland following a hit on teammate Marcus Johansson that sent him to the hospital. “Tonight’s hit [on Johansson], which was a hard, clean hit, but if guys are running at our skilled guys we need to hold them accountable and I thought there was an opportunity for me to step up and you know, fill that role."

In his 13th season in the NHL, Backes was a healthy scratch at times for the first time in his career. He has two years and $12 million remaining on a five-year deal signed with the team in 2013 after a decade with the St. Louis Blues.

The 34-year-old said his new role stemmed from a recent conversation he had with Bruins coach Bruce Cassidy.

“I asked [Cassidy] when we were in Vegas and we had a meeting if I could be put in roles or places that would have a bigger impact on games and you know, whether that’s with my gloves off or my gloves on I think he’s provided me those opportunities and hopefully I’ve done my job for him," Backes said.

After sustaining his third concussion in as many seasons last November, Backes acknowledged the dangers of accumulating head injuries.

“You start piling them up, it’s not fun when, or if, you have a concussion,” Backes told The Boston Globe at the time. “You start adding them up and trying to work through it, if you’re multiplying them on top of each other, it starts to get dangerous.”

Cassidy also says he appreciates the inherent risk in physicality for a player like Backes.

"Listen, they’re human beings first, and when you coach them every day that’s always a concern," he explained. “But David, I think, is grabbing onto an area of the lineup where he feels he can contribute. So, we really appreciate that as a staff and the players do too, that he’s putting himself in harm’s way for the good of the team, and that’s leadership."

“My wife probably does [worry], but that can’t be a thought in your head when you’re out playing in the NHL,” Backes added. “You know, I guess it’s a calculated decision and if I’m going to stay part of this team and stay a part of a winning team, that’s maybe going to be part of my role and I’m okay with it. It’s sticking up for each other, sticking together again. It’s a staple of what we do here."

The Bruins' next game is Thursday night when they host the Florida Panthers.