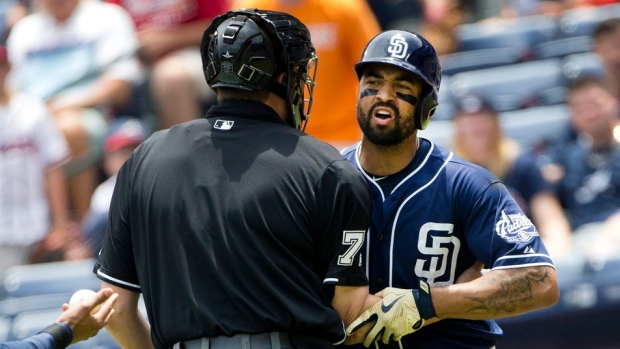 Kemp, the third batter of Thursday's game, was his on his left shoulder by a 90 mph fastball, slammed down his bat, stared at the pitcher and slowly walked up the first base line.

With Braves catcher Christian Bethancourt and plate umpire Jordan Baker walking between him and Teheran, Kemp exchanged words with the pitcher as players and coaches jogged out of the dugouts.

Kemp, standing between the mound and first base, then moved suddenly to his right and slipped on the infield, falling to his hands and knees as he appeared to try and get closer to Teheran.

Baker, who was standing close to Kemp, dropped to the field in front of Kemp to ensure a fight wouldn't begin.

Both bullpens emptied, too, but the incident ended with no punches or shoves exchanged. Teheran and Kemp both stayed in the game.