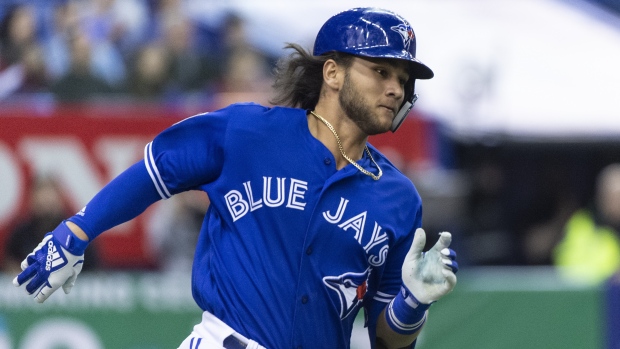 TORONTO — Forcing his own organization’s hand was always the easiest way to envision Bo Bichette making it to the big leagues this summer.

Go out and put up numbers so impressive that the Toronto Blue Jays front office has no choice but to promote the 21-year-old shortstop and challenge him at the game’s highest level.

Even though it’s been interrupted by a hand injury, that’s exactly what Bichette has done from the first day of spring training way back in February.

Not only did he show up to camp looking more athletic defensively after another winter of off-season work, Bichette’s hit tool and developing power have continued to progress.

It’s a thing of the past.

Since returning to Triple-A Buffalo on June 13, Bichette has slashed .342/.375/.605 with a pair of homers, a pair of steals and six extra-base hits in nine games.

That’s pushed the 2016 second-round pick’s season line with the Bisons to .286/.340/.484 in 101 plate appearances, which is even more impressive considering the fact he started the year as the youngest player on the circuit.

Bichette’s early injury didn’t do anything to help speed up his timeline, but fact he was lucky enough to avoid surgery keeps a second-half promotion to Toronto in play.

“I would say we’d really like to see some time in Triple-A and to get his legs under him and have a good, strong foundation before we have that discussion,” Jays GM Ross Atkins said when asked about a potential promotion. “His spring training was extremely impressive and what he’s done in the minor leagues so far, the teammate that he is, the effort that he has, is really a lot to get excited about.”

Questions surrounding how long he’ll stay at the shortstop spot remain, but Bichette has done everything in his power to answer those, showing back in March that the defence is, indeed, improving.

The main issue evaluators see is an erratic throwing arm.

But, really, it’s a minor issue since the fallback plan is Bichette becoming a very good defensive second baseman, where the arm is less of a focus.

Unlike Vladimir Guerrero Jr. a year ago when service time considerations were at play, they may not be a factor with Bichette.

The Jays may prefer to let Bichette get comfortable at the big-league level late in this season, so as to help him hit the ground running in 2020.

“So much depends on how the next month pans out for us and how his progress develops, but the thought of having his passion, his competitiveness, Cavan Biggio’s leadership and diligence as a teammate, the excitement around Vladdy, the excitement Lourdes Gurriel, and that group playing together is extremely exciting,” Atkins said.

Through his first 23 games in Triple-A, Alford was struggling along with a .143 batting average and striking out in almost half of his trips to the plate.

Safe to say, the 24-year-old outfielder was out of sorts at the plate.

But on May 4, Alford’s two-hit day included a home run, and something seems to have clicked from that point on.

As he approaches his 25th birthday next month, Alford continues to make adjustments in order to cut down on the swing and miss, leaving the Jays front office in wait-and-see mode.

Alford will get another opportunity to prove he can hit major-league pitching at some point soon, but the Blue Jays want to see him continue to do it in Triple-A for longer than six or seven weeks.

In the conversation for a potential spot start earlier this month with the big-league rotation depleted, Murphy’s last two turns have not been pretty.

On June 7, the big right-hander lasted only 2.1 innings, an outing that was followed up with an eight-run torching on June 13.

He hasn’t pitched since due to a mechanical adjustment that he’s been forced to undergo in order to eliminate an illegal toe-tap from his delivery.

Those two starts pushed Murphy’s ERA from 3.69 to 4.78 and likely guaranteed the 24-year-old is going to need some Triple-A time before being deemed ready by the Blue Jays’ player development group.

Despite the recent hiccups, Murphy has shown an ability to miss bats in the high minors and the ERA is quite misleading when you look at the overall body of work.

As a first-round pick, Zeuch is far from under the radar in the general sense.

But considering the 6-foot-7 righty was shut down in February with what was then described a minor lat strain and didn’t make it back onto a mound until earlier this month, many have forgotten that Zeuch is one of the more intriguing rotation options on the way.

After a pair of tuneup starts with High-A Dunedin, Zeuch made his Triple-A debut on Saturday, tossing 5.2 innings of shutout baseball.

One benefit of Zeuch’s late start is he’ll have enough more than enough innings to carry a fairly heavy workload in the second half, and a good chunk of those starts could come in the big leagues if he continues to pitch well with the Bisons.

Zeuch profiles as more of a back-of-the-rotation innings eater than an impact arm, but his size and ability to generate ground balls are a combo that the Jays front office loves.

Atkins doesn’t hide the fact that they’re leaving no stone unturned when it comes to building rotation depth.

“The big question is pitching and where that comes from,” Atkins said. “We’re working hard. We feel very good about the depth we have in the minor leagues and the layers of it. Obviously, Nate Pearson being the headliner.”

Another arm who could show up alongside Zeuch in Triple-A fairly soon is right-hander Julian Merryweather, who made his debut in the Jays organization on Monday after being acquired in exchange for Josh Donaldson during his long recovery from Tommy John surgery.

“His velocity has been well into the high-90s and the power is there and he’s always had spin,” Atkins said of Merryweather. “He was lighting guys up in spring training with bullpens. We are encouraged.”