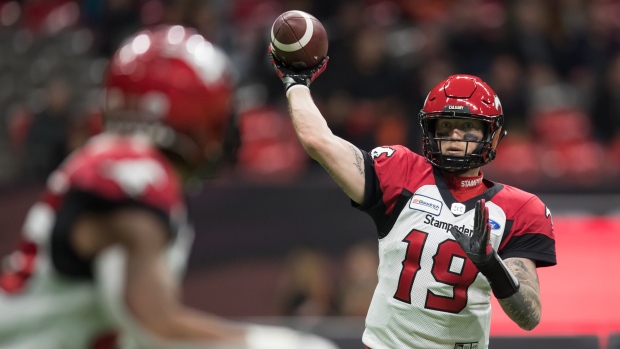 The Calgary Stampeders enter the CFL season with a healthy Bo Levi Mitchell, after taking time off during training camp to rest a sore groin, and a host of fresh faces.

The first test of that new talent comes Saturday against the visiting Toronto Argonauts. Calgary coach Dave Dickenson knows the Argos have the advantage of experience.

"I think the more veterans you have that are familiar with your system, the better you're going to be early. No doubt about it," he said. "But no excuses. I mean we've still got veterans. We've got guys. We're just not super-deep with veterans."

"I have a bunch of guys here who have never even played a pre-season game," he added. "So exciting on one side because I'm looking forward to seeing what they can do. Also a little anxious, not sure. That's what football's all about."

Helping settle those nerves is his belief that "championship teams play good football from Labour Day on."

The loss of top talent to CFL free agency and the NFL in the wake of its 2018 championship finally caught up with Calgary. Half of the team''s 12 wins in 2019 were by five points or less.

Dickenson is looking forward to playing for real after a pandemic-affected training camp.

"Consequences to your decisions. Consequences now," he said. "You decide to jump a route and give up a touchdown, it's a consequence. No consequences in practice. That's what we're looking forward to, is showing what the Calgary Stampeders are all about and competing at the highest level."

Asked about the turnover in personnel, Mitchell says he has faith in Calgary's front office.

"They know what they're doing. There's a reason we've been so successful. It's not just because of the guys wearing the helmets," he said. "We're a big part of it but they bring in the right guys and they make sure we've got the team on the field that we need.

"I'm excited to see a lot of the young guys we have."

The health of the Stampeders quarterback is key. Calgary, which finished the season at 12-6-0, went 4-3 in Mitchell's absence.

The six-foot-two, 199-pound Mitchell has been the picture of durability since entering the league in 2012, missing just one of 126 regular-season games through 2018. But in 2019, he spent seven games on the injured list with backup Nick Arbuckle, now with Toronto, taking charge.

The 31-year-old Mitchell underwent shoulder surgery in December 2019. But it was his groin that had him watching some of training camp.

"I'm sure the guys will give me crap because my body should feel good when you take that many days off camp," he said.

Canadian Michael O'Connor, who saw action in nine games for the Argos in 2019, and rookie Jake Maier (University of California, Davis) will back him up.

"I really was happy with the progression I saw with Michael and Jake, to me, exceeded expectations as a rookie," said Dickenson.

"I think you saw it watching practice, we have three guys that we can win with," he added.

Mitchell was the CFL's outstanding player in 2016 and '18 and has two Grey Cup rings.

In Week 3 of the 2019 season, he became the 20th player in CFL history to throw for 25,000 career passing yards and just the 12th to do it for one team. That was also the game where he suffered a tear in the pectoral muscle of his throwing arm.

The Stamps were down offensive linemen early in camp. But the numbers have grown and former Toronto centre Sean McEwen, a Calgary native who was the East Division finalist for top offensive lineman in 2017 and the Argos’ team nominee for outstanding offensive lineman award, should help make life easy for Mitchell.

They will be opening holes for Ka'Deem Carey, a former Chicago Bears fourth-round pick who made seven starts for the Stamps in 2019.

"Right now our line, they're big, they're powerful and they like to move guys," said Mitchell. "So it will be fun to watch him work."

"We've got a lot of new guys here so I just wanted to show them some love," he said.

Veteran defensive end Shawn Lemon is back for a second time with the Stamps after being released by Edmonton. The 32-year-old, who has 70 career sacks, has also stints with Saskatchewan (twice), Edmonton, Ottawa, Toronto and B.C.

"It's a privilege to have that horse on your helmet. I played some good football here," said Lemon, who had 13 sacks for the Stamps in 2014.

He helps fill the hole left by the retirement of former Ticat Connor McGough, who signed with Calgary in February 2020, as well as injuries to Cassanova McKinzy and Chris Odom.

"I feel fortunate we can have Shawn," said Dickenson. "Listen, he's always been productive."

There are some new faces in the defensive secondary which lost veteran Brandon Smith to retirement after the 2019 season.

The Stamps longtime kicking tandem has been split up with the retirement of punter Rob Maver after 10 seasons. This year's options include incumbent kicker Rene Paredes, entering his 10th season with Calgary, and Ronnie Pfeffer, formerly of Ottawa and Toronto, and Australian rookie punter Cody Grace.

A look at the Calgary Stampeders:

LAST TIME OUT: The Stampeders finished second in the West with a 12-6-0 regular-season record. The campaign ended in a 35-14 semifinal loss to eventual Grey Cup champion Winnipeg.

RECENT ROLL: Before the 2019 season, the Stamps had appeared in five of the seven previous Grey Cups, winning in 2014 and '18.

ROCK ON: Movie superstar and former pro wrestler Dwayne (The Rock) Johnson spent two months on the Stamps practice roster in 1995 as a defensive lineman.

This report by The Canadian Press was first published Aug. 4. 2021