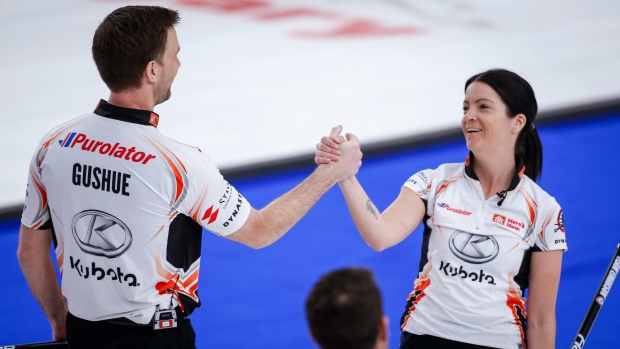 Another week, another quarantine. That seems to be life these days for Brad Gushue and Kerri Einarson. The two curlers are currently tucked away in a hotel in Aberdeen, Scotland awaiting the start of the World Mixed Doubles Championship, where they will represent Canada.

“It’s been the shortest, longest year I’ve ever played in my life,” admitted Gushue in a virtual press conference on Friday.

So far, he’s spent 31 days in quarantine. That’s included 14 days prior to the Tim Hortons Brier, 13 at home in Newfoundland and Labrador after the Grand Slam of Curling events and another four in Scotland. Once this week’s event is over, he’ll be required to do another 14 when he arrives back in Canada.

It’s been a similar situation for Einarson who wrapped up the women’s world championship and then headed to Scotland for her quarantine.

“Nope,” she said when asked if there was a difference in the lockdown in Scotland. “The rooms are a little smaller. Different walls.”

The only relief from the hotel rooms are three 25-minute walks they are allowed each day. Other than that, it’s up to them to pass the time.

The two skips, who combined to capture the Canadian title back in March, will get their first look at the ice at the Curl Aberdeen facility where they will compete on Saturday ahead of their first game on Monday.

Canada has never won the world mixed doubles title in the 12 years of the competition, with its best finish a second on two occasions. Gushue and Einarson are hoping to change that.

Although both are relative newcomers to the two-player version of the roaring game, they are veterans of big competitions, which should be to their advantage

“I’ve been fortunate enough in my career to represent Canada multiple times and I know what the feelings are and the expectations,” said Gushue. “We’ve had good and bad moments throughout that experience. But really for us, I know what made Kerri and I successful in Calgary and really it’s just going to be the effort to mimic that. For us it was keeping it light, keeping it fun.

“I think our skill level is pretty high and we’ve just got to find a way to let that come across on the ice. We’re not going to out-sweep any teams but we’ll certainly out-shoot teams.”

As skips, sweeping is not something either player does on a regular basis with their four-player teams, but this format requires them to get the brushes out. That means some sore muscles at the end of every day.

“It’s definitely nice we have some physio here to keep us loose and out there,” Einarson stated. “And getting back to sweeping and judging and doing that sort of thing, I really enjoy that part of mixed doubles as well.”

Another major difference between the four- and two-player games is the pace at which ends develop. With eight rocks, Gushue said, there is time to build an end and to move rocks around to set up the final shot. That isn’t the case in mixed doubles, where there are just five stones in play.

“The first couple of games in Calgary, I felt in my mind I was building a really nice end and then all of a sudden it was over,” said the Olympic gold-medal winner. “We didn’t have a chance to blow up the situation and make it look really good for us. You have to be quick and you have to be aggressive and that was a big adjustment.”

Two experienced coaches, Scott Pfeiffer and Heather Nedohin, are along to provide assistance and have a good knowledge of the game and the opponents the Canadians will face.

There are also some entrants in the 20-team competition that aren’t from countries traditionally seen on the international stage. Canada starts off with a game against Spain, while one of the favourites is Hungary, a two-time champion of the event. Neither country has played in the four-person world championship.

While Gushue and Einarson are hoping to bring Canada its first gold medal from this event, there is no doubt they are also looking at the end of the season, when they can reunite with their families and get back to somewhat of a normal life.