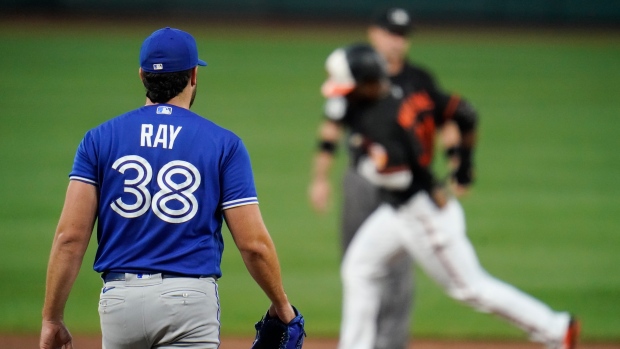 Hyde could be screaming some colourful language at Ray from the Orioles dugout during the second inning. The yelling continued after Ray struck out Orioles shortstop Richie Martin and the Toronto left-hander motioned for Hyde to come out of the dugout, though nothing escalated from there.

Hyde said after the game the tirade was unprofessional on his part.

“I understand that some of my language was picked up by the mic by our dugout, and I just wanted to apologize to all the fans out there, to the Blue Jays, Robbie Ray, Charlie Montoyo. It was a little bit of heat of the moment,” Hyde said.

“I felt like our team was being accused of something that wasn’t happening. We had a lively dugout tonight. But my language, there’s no excuse for that. So, I wanted to just apologize and recognize that that was unprofessional on my part.”

“I’m not going to waste my time with someone that doesn’t get in the box. I don't have that time of day,” Ray said of the incident, adding he found it "curious" how the Orioles were able to lay off his slider.

"All I know is my guy kept his composure, stayed focused and did the job. And that's why we stayed in the game. That's what I'm going to say about that," Blue Jays manager Charlie Montoyo said.

Ray was tagged for three runs in 4.1 innings Friday night as the Blue Jays had their eight-game winning streak snapped 6-3.

“I felt really good coming into this game,” Ray said. “The ball was coming out really well. They just battled.”

The two teams will play a doubleheader Saturday before wrapping up the series on Sunday. Hyun Jin Ryu will take the ball for the Blue Jays in the first game, who enter play sitting 0.5 games back of the New York Yankees for the second wild card spot and one game back of the Boston Red Sox for the first spot.