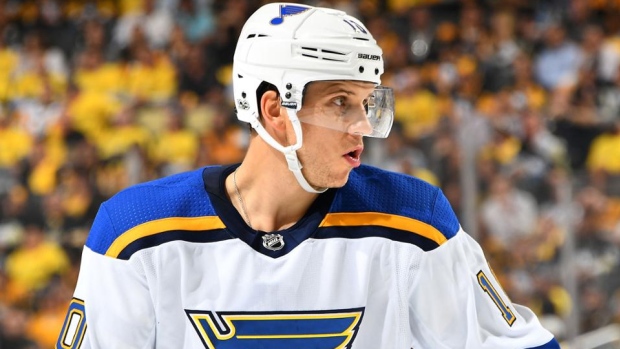 If you have been following TSN’s Trade Bait board, you’ve surely noticed how many marquee names are present. Artemi Panarin, Matt Duchene, Mark Stone, and Sergei Bobrovsky are the headliners, but there are at least a dozen attractive names assumed readily available.

One of the names that stands out for me is St. Louis centre Brayden Schenn. The Blues have had a roller-coaster season – an awful start followed by an impressive rebound that has put the team in a situation where a playoff chase is plausible. However, the math still isn’t favourable for the Blues. Estimates have them around 26 per cent to reach the postseason. If we are using that as a barometer, the Blues are more likely a seller than buyer heading into February.

Regardless of how the next month shakes out, it seems plausible the Blues are evaluating moving Schenn. He is having a down year (more on that in a minute) with one season left on his current $5.125 million AAV contract.

We’ve seen a bit of a spike of these quasi-rentals moved at the trade deadline in recent years, mostly because buying teams tend to like a little more contractual security on players. Moreover, Schenn turns 28 in August – not old by any means, but no longer a spring chicken either. Considering his NHL production to date, he will likely get a sizable contract in 2020-21.

Schenn is the classic buy-low candidate. If you are able to measure out expected performance versus actual performance, you can easily find candidates who should beat their forecast in future periods.

We’ve done this before, whether it was with Jeff Skinner this year, or Brendan Gallagher leading into 2017-18. The reverse can also be true, like it was for Milan Lucic and Matt Beleskey before their big contracts. Effectively, we are looking at outlier performances and preying on teams who would prefer to bet in the other direction.

That brings me back to Schenn. He’s been a reliable top-six forward for years but 2018-19 has been particularly cruel. The counting numbers (nine goals, 18 assists) are obviously ugly relative to prior seasons; those totals put him in the 58th percentile league-wide and fifth (per-60 minutes) on his own team. The lack of scoring has been an epidemic in St. Louis and Schenn, like most other forwards on that roster, has been victimized accordingly.

But it’s not for a lack of effort. Schenn is actually as offensively dangerous as he has ever been, but the goals – relative to what we would expect from this type of volume and this type of quality – are lacking. Here’s just 5-on-5 play as a starting point, expected versus actual goals: 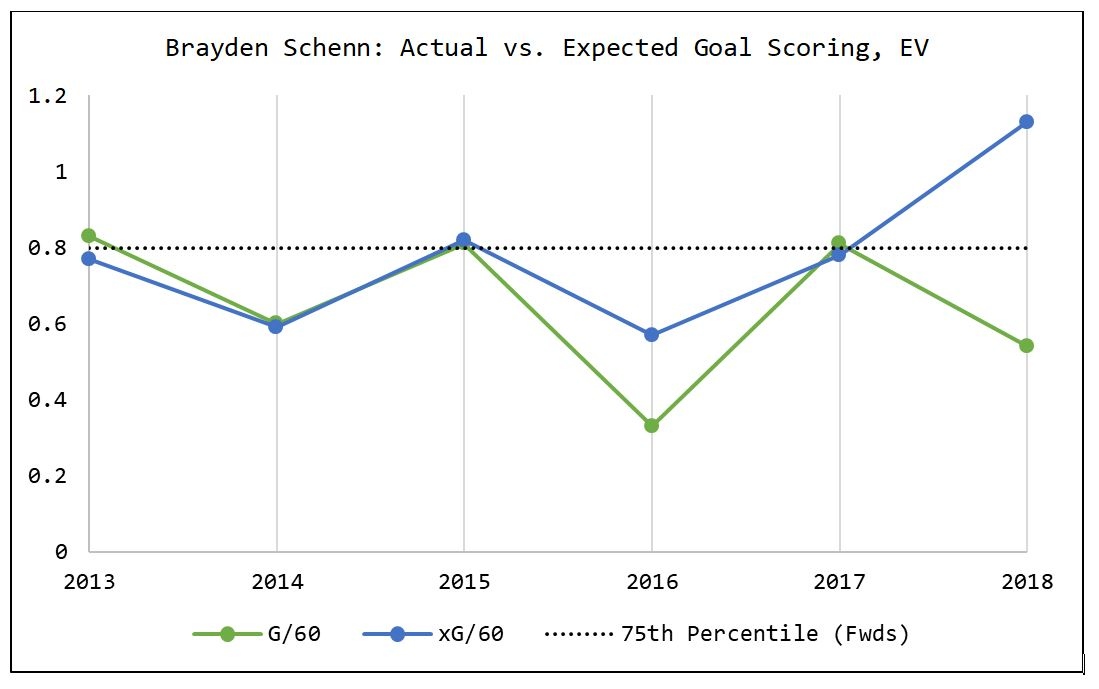 You can see that Schenn’s historical actual and expected goal rates are reasonably in line with one another, which is true for most players over long samples of data. But this year is particularly interesting. His actual rate goal scoring has dropped to a low only realized once before in his career, back in 2016-17, yet his expected goal scoring has spiked emphatically.

His teammate quality has been stable, further confounding the issue. His two most common linemates have been two of the more talented top-sixers in the league in Jaden Schwartz and Vladimir Tarasenko. In short: Schenn has seen a spike in the combination of shot quantity and shot quality, but the goal results haven’t moved much quite yet.

From a goal-scoring perspective, you can see why Schenn might be a bit undervalued right now. If he was actually scoring at his expected rate, he would be about seven goals better at 5-on-5 alone. That is already worth a win in the standings!

Looking beyond individual goal scoring and to the goal scoring of his teammates, you wonder if there is something more systemic going on. It seems very possible that one player is suffering from a lack of puck luck. But an entire line, or an entire five-man unit? That’s a bit more difficult to believe.

But the rest of his teammates – the guys receiving his passes – are scoring right around how we would expect. Expected goal rates for Schenn’s teammates are at a six-year high. Actual goal rates are the second highest in the last six years: 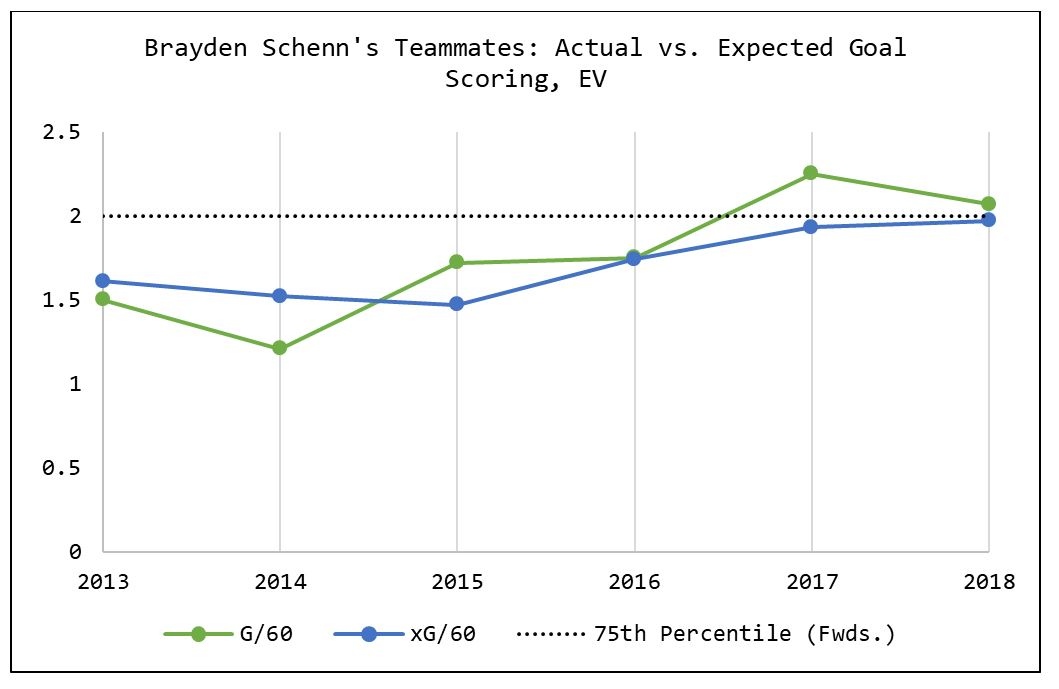 Schenn is still having a pretty sizable impact on the rest of his teammates – the forwards and defencemen he’s regularly playing with are generating goals like top-tier talent, which is certainly encouraging. Doubly so if you believe that centres have heightened control over the offensive production of their respective teammates.

Yet Schenn’s assist rates are relatively average season-to-date. I again assume that this is little more than unfavourable randomness impacting Schenn. In the five years prior, Schenn was assisting on about 60 per cent of teammate goals, which is right around the norm for a top-six forward. This season? He’s at 42 per cent. There’s a handful of assists lost there that further impact Schenn’s counting numbers.

All things considered, I think Schenn’s having a pretty strong season. For a guy who already had billing as a two-way centre, it’s certainly encouraging that his offensive play has peaked in recent years. I wouldn’t be dissuaded by the low point totals. Schenn, individually, and his teammates frequently generate offence. If you can look beyond simple individual goals and assists totals during evaluation, you can see a player who has been much more impactful than would appear at the surface.

If you are a buying team at the trade deadline, that’s the exact type of player you want to be searching for.