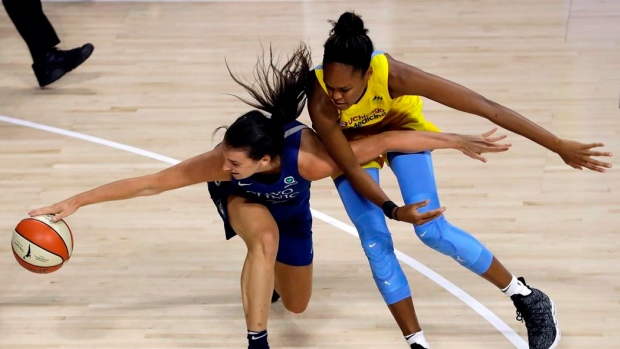 Bridget Carleton didn't even have time to text her parents last week before she made her first WNBA start.

The 23-year-old from Chatham, Ont., learned 30 minutes before tipoff during the Minnesota Lynx's pre-game meeting with coach Cheryl Reeve. Sylvia Fowles was a late scratch due to a sore calf, and Carleton's phone was already turned off.

"(Reeve) just said 'You ready for this?'" Carleton said. " I'm like 'Yup.' And that was about it. Probably was better (to receive no notice). No time to really think about it. Just get out there and play."

Carleton was spectacular in her first start, scoring 25 points and grabbing seven rebounds in Minnesota's 92-66 win over fellow Canadian Kia Nurse and her New York Liberty. Carleton became just the third WNBA player in 20 years to have at least 25 points and five rebounds in a debut as a starter.

Carleton's mom Carrie and dad Rob were finishing a round of golf when someone texted the Lynx's starting lineup.

"We were coming home to watch the game anyway," Carrie told the StarTribune. "But we're thinking, we can get there a little late. But then we literally ran off the golf course."

Carleton is one four Canadians playing in this unique WNBA season at the IMG Academy in Bradenton, Fla. The others are Nurse, Lynx forward Kayla Alexander, and Indiana Fever forward Natalie Achonwa.

Carleton's solid performance comes after a rocky rookie season that saw her drafted then waived by the Connecticut Sun after she'd played just four games. The Lynx signed her last summer.

Like their NBA counterparts, the WNBA's 12 teams are playing in a bubble — or the "wubble," as it's affectionately known — which poses different challenges during the COVID-19 pandemic. There are no fans in the arena. With games every second day, Carleton said down time is spent resting. There's a pool to lounge at with teammates. There's Netflix. She's currently watching "Last Chance U."

It's far better, the former Iowa State star said, than not playing at all.

"Obviously it's good to be playing, good to be doing what we love, doing our jobs again, and giving people things to watch on TV, which is really exciting," Carleton said.

The most impactful piece of the WNBA's season, however, is the dedication to social and racial justice issues. The league said in a pre-season press release that all aspects of the game and player outfitting would be dedicated to Black Lives Matter and to honour victims of police brutality and racial injustice.

"That's the most important thing about this season, bringing awareness to the injustices that are going on throughout the whole world really, just having these conversations, bringing light to what's going on . . . being leaders in that aspect," Carleton said.

WNBA players were already among sport's most vocal athletes. Back in 2016, WNBA players protested the killings of Philando Castile and Alton Sterling by police officers. They wore shirts proclaiming "Change Starts with Us" and "Black Lives Matter." The entire Indiana Fever team knelt and locked arms for the U.S. anthem.

This WNBA season tipped off with the Seattle Storm and Liberty walking off the court during the anthems. They held a 26-second moment of silence for Breonna Taylor, the 26-year-old who was killed by police when they broke into her home with a battering ram on a no-knock warrant. Every starter on the Liberty's roster was listed as "No. 26, Breonna Taylor."

Last week the Atlanta Dream, Phoenix Mercury and Chicago Sky arrived at their games in "Vote Warnock" T-Shirts. The message was a shot at Dream part-owner Kelly Loeffler, a Republican senator and outspoken opponent of Black Lives Matter. Raphael Warnock is a Democrat and Black pastor in Atlanta who's vying to unseat Loeffler.

"Their camaraderie saying they are in this together," she told reporters. "That's the players doing that. It's their way to remind people that Black Lives Matter."

Last month, Achonwa won the 2020 Dawn Staley Community Leadership Award for her efforts in fighting racial injustice and promoting mental health. The WNBA made a US$10,000 donation on Achonwa's behalf to the Madam Walker Legacy Center in Indianapolis, through which four women entrepreneurs will receive US$2,500 to start their own business.

"It is important for me optimize the benefits and privileges I receive from being a professional athlete," Achonwa said in a statement. "A big piece of that is using the platform I'm awarded to connect with people, promote a level playing field and inspire others to make positive change."

Achonwa, a 27-year-old from Toronto, opened her recent Zoom video availability with media by boosting a couple of player-led Fever charitable initiatives.

"Super excited that visions of us as players have been supported and pushed through by our organization," she said.

The team's #Rebounds4Change is a social justice fundraiser where fans can make a donation of any amount for each rebound the team gets this season. Players plan to auction off custom sneakers at season's end, with proceeds of both going to a variety of community non-profit organizations in Indiana.