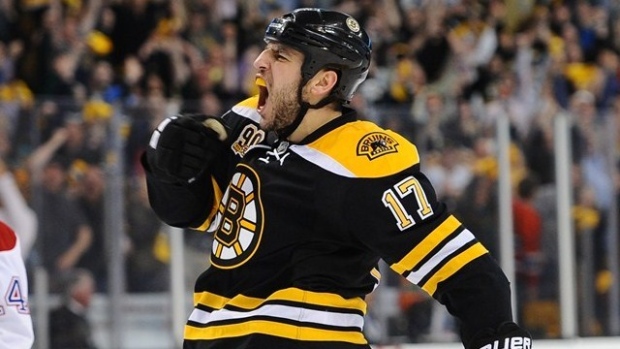 Milan Lucic thought the Los Angeles Kings were going to draft him in 2006. A year later, he scored his first NHL goal at Staples Center for the Boston Bruins.

When Lucic joined the Kings in a trade Friday, he thought back to all of his prior connections with Southern California — and the fact that he had just been at Disneyland with his daughter earlier in the week before this deal sent him back to the Happiest Place on Earth.

"I guess I've got to get an annual pass now, she loves it so much," Lucic said.

The Bruins traded their top-line left wing to the Kings for backup goalie Martin Jones, defenceman prospect Colin Miller and the 13th pick in the draft, which Boston used on defenceman Jakub Zboril.

Lucic had been with the Bruins for his entire eight-season NHL career, getting 139 goals and 203 assists in 566 regular-season games. He won the Stanley Cup with Boston in 2011, and he's joining a team with two championships in the past four years.

"The most exciting thing about moving on from Boston is I get to move on to a team that already knows how to win," Lucic said. "They're not a team that's learning how to win, or trying to make that step to win a Stanley Cup. They already know how to do that, and with the possibilities of playing with two really great players with (Anze) Kopitar and (Marian) Gaborik, it's definitely a real exciting feeling."

Lucic is a tough-nosed power forward from Vancouver who had 18 goals and 26 assists in 81 games last season — somewhat disappointing totals for a three-time 20-goal scorer. That didn't help his bid to get a new contract with the Bruins, and he carries a $6 million salary cap hit this season in the final year of his deal.

"I think in a way, it's a good thing going into next season that they didn't make the playoffs," Lucic said. "It gives the players a good chance to get their rest and get re-energized and back into tip-top shape and refocused and hungry again."

Lucic said he knew a deal was possible on draft day after waking up with "that nervous-anxious-excited-sad-all-in-one feeling going on in my stomach." The Bruins got a decent haul for an above-average NHL player with just one year left on his deal.

Although Jones played just 15 games last season, he has been a standout backup for two years in Los Angeles, winning his NHL-record first eight career starts in late 2013 before earning a Stanley Cup ring. Miller had 19 goals and 33 assists in 70 games for AHL champion Manchester last season.

Draft day was busy for the Kings even without a first-round pick. Earlier in the day, they re-signed restricted free-agent Tyler Toffoli to a two-year, $6.5 million extension, locking up the promising scorer before teams could tempt him with offer sheets.