The National Hockey League regular season has closed, so our attention now turns to the first round of the Stanley Cup Playoffs.

The Western Conference treated us to a compelling end-of-season finish, where the Dallas Stars and Nashville Predators nabbed the final two playoff spots. The Eastern Conference, of course, has been decided for months.

This year’s first-round has an interesting dichotomy. Whether you are looking at the data, observing what oddsmakers are pricing in at sportsbooks, or just reaching out for consensus, there are clearly three heavy favourites: the Colorado Avalanche against the Nashville Predators (surely exacerbated now with Juuse Saros’ injury), the Florida Panthers against the Washington Capitals, and the Calgary Flames against the Dallas Stars.

The other five series are a bit less clear. Oddsmakers, as one example, are giving the Edmonton Oilers a significant amount of respect in the Jay Woodcroft era. They also see the Boston Bruins, despite having finished 32 goals back of the Carolina Hurricanes, as a serious threat to upset the top seed out of the Metropolitan. More on this in a moment.

To break down these series and better understand where upsets may manifest, consider the full-year results for each team measured against one another. The below table shows each team with home ice’s expected advantage at even strength versus their expected advantage at special teams, which considers both performance and the rate of penalties drawn and taken: 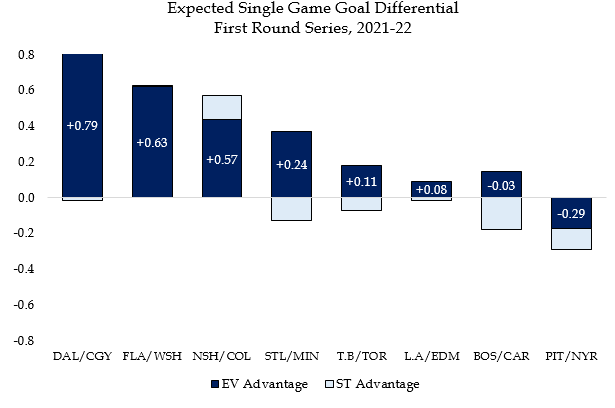 We have seen true underdogs not only compete but pull off staggering upsets in the first round in past postseasons. The NHL’s lower-scoring environment creates high intra-game volatility, and all it takes is some shooting luck or a goaltending heater to turn the math upside down. That’s what it’s going to take for Dallas, Washington, or Nashville to pull off an upset. All three of these teams figure to be a half goal or worse than their opponent on a per-game basis, which is grim.

I mentioned the lack of clarity in the other five series. Here’s why. Let’s overlay expected single-game results against the lines oddsmakers have established for each series, and then talk through each matchup accordingly: 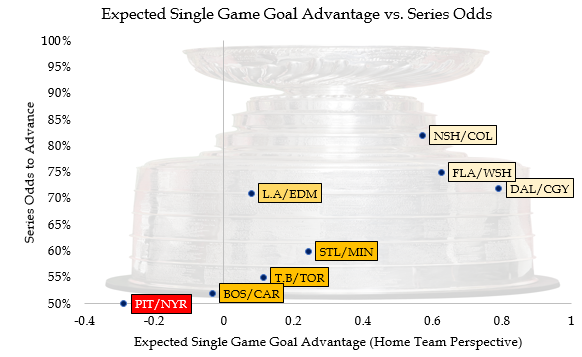 It is easy to simplify, but the data suggests this series will be decided on special teams, or the lack thereof.

The gap between the Wild and the Blues is significant at even strength, where nearly 80 per cent of games are played these days – Minnesota was +59 in goals, second only to the Stanley Cup favourite in Florida. And, if games were only played at even strength, we may be talking about the Wild in the same air as a few of these other teams.

The Blues may not have the headline names as some of the other man advantages around the league, but their two units averaged more than 10 goals per 60 minutes of play up a man, a number only topped by Auston Matthews and the Toronto Maple Leafs (+10.3 per-60). Five players – David Perron, Brandon Saad, Pavel Buchnevich, Ryan O’Reilly, and Brayden Schenn – combined for 42 goals, a total higher than 10 teams.

The other side of special teams is the same story. Only three teams conceded fewer goals on the penalty kill than the Blues (5.7 per 60 minutes), with both Ville Husso (89 per cent stop rate) and Jordan Binnington (86 per cent stop rate) erasing goals when their team needs it the most. What helps is an oppressive kill unit in front that does well to take away the interior from opposing power plays. 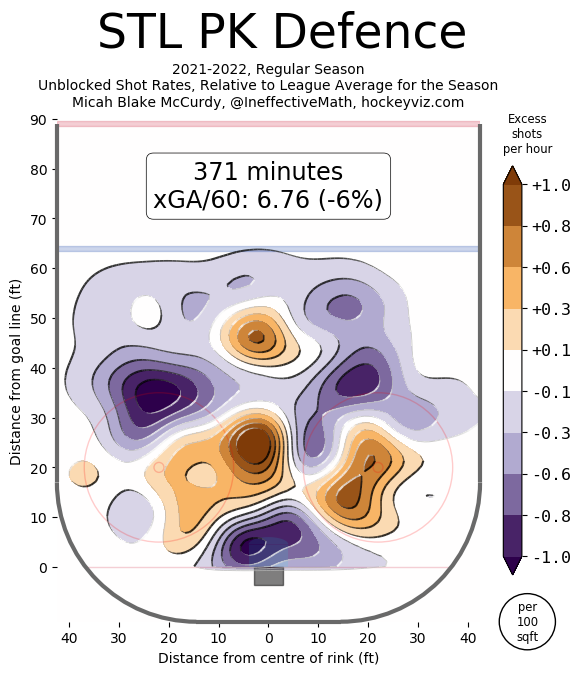 If this series stays at even strength, or the Wild get decent enough results on special teams, Minnesota should cruise to victory. But if this series becomes a penalty fest, or the St. Louis power play does what it has done all year it will be a totally different story.

Back in January, I wrote that this year felt different for the Maple Leafs – long gone were the days of a top-heavy lineup or a battered and immature blueline that could spell doom against any credible offence come playoff time. This is as deep and talented a team as the Maple Leafs organization has iced in the modern era.

And yet here we are, with the Maple Leafs locked in another de facto coin-flip series against an impressive opponent. How impressive? The Tampa Bay Lightning are trying to win their third Stanley Cup in as many years. That impressive.

There are two concerns I think coming out of Leafs Nation: The first is whether this team’s depth can hold up against another fantastic opponent, while the second is goaltending.

The worries about the depth seem little more than a boogeyman to me. For starters, in prior playoff exits, it was the top of the Toronto lineup – especially offensively – that failed to deliver when it mattered most. But if you look at the contributions each team realized this year (I’m using Goals Above Replacement to measure value; other measures show similar results), there’s little evidence Tampa Bay can overwhelm Toronto further down the lineup. 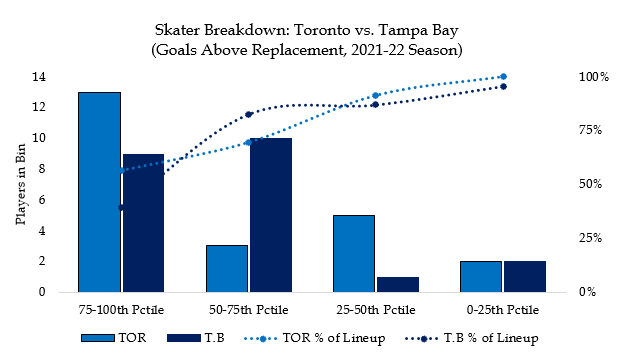 The easiest way to summarize the two lineups: whereas Toronto had a dominant lineup with a handful of under-performers, Tampa Bay had a very strong lineup with only a couple of performance drags (Zach Bogosian, Brandon Hagel).

Toronto counteracted having more performance drags throughout the lineup by having perhaps the best line in hockey, though an injury may force first-line winger Michael Bunting out of the lineup for the early part of the series. There’s little reason to not expect that to continue in the playoffs, and I think it’s the best argument there is that Toronto has the better of the two lineups entering the season.

But the goaltending concern is real. Jack Campbell has been a nice fit in Toronto since being acquired from Los Angeles, but is it reasonable to think he could outplay Andrei Vasilevskiy in a series? It’s possible, but hardly something we would consider betting on.

Below is a three-year retrospective of the two goaltenders. Is this enough to tilt the odds back in Tampa Bay’s favour? 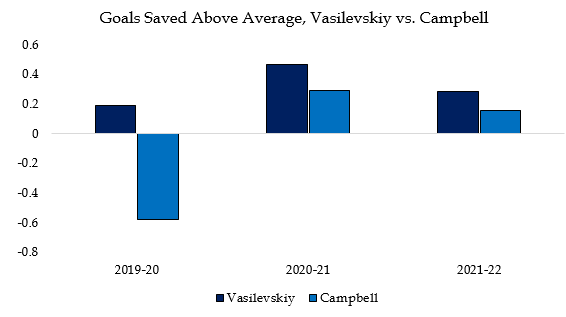 Oddsmakers love the Woodcroft era Oilers, and for good reason. Since the coaching change, Edmonton has played to a 119-point pace, trailing only the Florida Panthers and Calgary Flames in that department. In many ways, this is a materially different team than the one we drew accustomed to under Dave Tippett – a team that, for inexplicable reasons, carried the NHL’s 17th best even-strength offence.

The performance of the Oilers offence never seemed real or believable under Tippett. How could it when you have weaponry that starts with Connor McDavid and Leon Draisaitl? Oilers fans believe personnel changes and a more north-south transition game have lent themselves to unlocking an explosive offence. And, quite frankly, it’s hard to argue. They are seventh in even-strength scoring, and more importantly in this case, third in expected even-strength scoring. This isn’t a team riding some shooting luck. They are lethal in the offensive zone.

How much you believe Woodcroft turned this team around is likely how much you believe there is upset potential here. The Kings are a very game and well-rounded club, but scoring is a chore, and most games end up gridlocked. Still, Edmonton’s performance for much of the season is reason for pause.

The Carolina Hurricanes are another team that could make a serious argument they are the best team in the league, if not for persistent penalty problems.

The Hurricanes live in the penalty box, spending more time there than any other team in the league, and by a considerable margin. They were able to win the Metropolitan Division in large part because of how effective their penalty kill is. In a bit of irony, the league’s most penalized team also happens to have the league’s most ferocious penalty kill (4.1 goals conceded per 60 minutes).

The good news for Carolina here is they have a favourable matchup on that front. Boston’s core strengths are obvious: they dominate the puck like few other teams do at even strength and score by generating heaps of volume. They also carry one of the league’s better penalty-killing units.

The Patrice Bergeron line can and likely will eliminate whichever opposing group head coach Bruce Cassidy is scared of the most, but Carolina is a four-line team that will be more than happy to trade goals with the Bergeron line over the course of this series. They have the better and deeper team, and their one risk area – their inability to stay out of the penalty box – is going to be a tough one to take advantage of for this Bruins team.

One other development to keep an eye on: Frederik Andersen is still battling a lower-body injury, paving the way for platoon option Antti Raanta to start the series in net for the Hurricanes.

This series is priced interestingly by the oddsmakers. The New York Rangers have home-ice advantage and were playing much better hockey than the Pittsburgh Penguins were over the final stretch of the regular season. If we look at regular-season goal differential, you can see where Pittsburgh flatlined, and where the Rangers really turned up the heat: 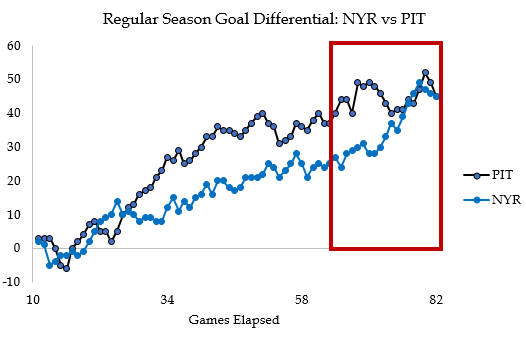 In some ways, the series reminds me a lot of the Lightning and the Maple Leafs, where one team (the Penguins) appear to have the stronger lineup, offset by a goaltending strength across the aisle (the Rangers).

That part should not be discounted. Igor Shesterkin is the runaway Vezina Trophy favourite, stopping 93.4 per cent of shots and erasing 37 goals (!) more than expected over the course of the regular season. Pittsburgh’s Tristan Jarry was good enough this year, but a 91.8 per cent stop rate and six goals saved above expected pales in comparison, and that was before a foot injury put his availability for this series into question.

One thing to keep an eye on, especially in a series like this, is penalties. When teams are this close in talent, separated by four goals over the course of an 82-game regular season, it can be penalty imbalances (or special teams performance imbalances) that can break the proverbial tie. In this case, pay attention to the penalty box itself: 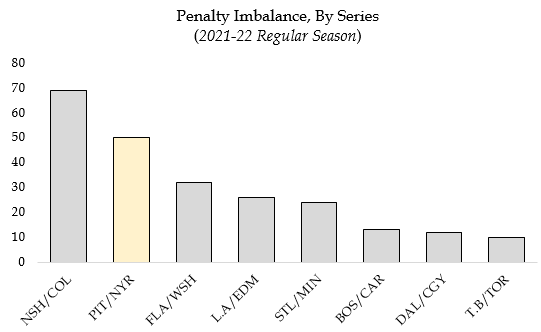 The only series that figures to see a bigger penalty mismatch is between Colorado and Nashville, and we don’t expect that series to go particularly long.

Can the Penguins take advantage of some incremental power-play opportunities and neutralize the Shesterkin advantage? That, I think, is the operative question heading into this matchup.