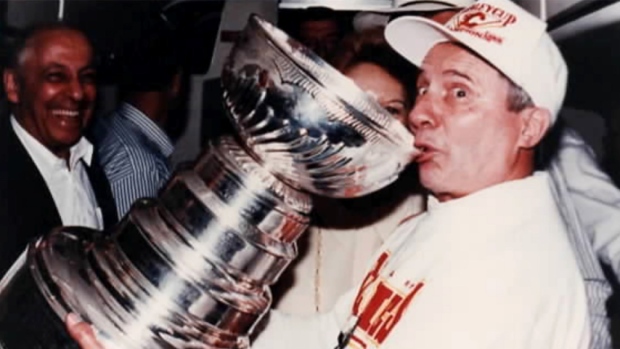 CALGARY — Byron Seaman, one of the founding owners of the Calgary Flames, has died at age 97.

Byron James "B.J." Seaman and his late brother Daryl "Doc" Seaman were among six Calgary men along with Nelson Skalbania who bought the Atlanta Flames and moved the NHL club to Alberta in 1980.

The Seaman brothers were co-owners of the NHL franchise for 30 years.

B.J. Seaman, who was born in Rouleau, Sask., died Saturday in Calgary, according to an obituary posted on the website of McInnis & Holloway Funeral Homes.

"We remain forever grateful for the prominent role B.J. and his brother Doc played in bringing the NHL to Calgary,” Flames co-owner and chairman Murray Edwards said Thursday in a statement released by the team.

“He was devoted to his family and lived a life of dedication to our Calgary community. We will miss B.J.’s friendship and support and send our heartfelt condolences to his loved ones and friends."

Byron, Daryl and brother Don arrived in Alberta for the start of an oil and gas boom in the 1950s. The siblings founded Seaman Engineering and Drilling, which later became Bow Valley Industries.

Byron was inducted in the Alberta Sports Hall of Fame and a recipient of the Governor General's medal. He received an honorary degree from the University of Saskatchewan in 1992.

He, Daryl and another Flames founding member, Harley Hotchkiss, established the Project 75 grassroots program to fund hockey projects. It was eventually renamed the Seaman Hotchkiss Foundation.

The Seaman brothers helped fund the International Hockey Centre for Excellence in Calgary. They also helped establish a magnetic resonance research centre at the University of Calgary.

"From the instrumental role that he played in bringing NHL hockey to his beloved city in 1980, through the ensuing 30 years, Byron left an indelible mark not only on the Flames but on the entire NHL," league commissioner Gary Bettman said in a statement.

"Through his commitment and passion for giving back to his community, he contributed greatly to the city of Calgary. The NHL has lost a dear friend."

B.J. Seaman served on boards of the Salvation Army and Calgary Children's Hospital, and on YMCA, UNICEF and Canadian Foundation of Ileitis and Colitis committees.

He was active in the United Church, according to his obituary, and enjoyed hunting, golf, the card game gin rummy, reciting Robbie Burns poetry and lunch at the Petroleum Club.

This report by The Canadian Press was first published April 29, 2021.