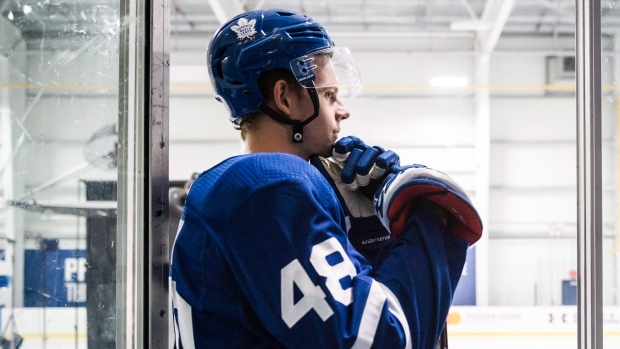 The Toronto Maple Leafs made their first move on Monday's trade deadline by acquiring defenceman Calle Rosen from the Colorado Avalanche in exchange for goaltender Michael Hutchinson.

The 26-year-old Rosen is a familiar face in the Leafs organization. He signed with Toronto as a free agent out of the Swedish Elite League back in 2017, going on to appear in eight NHL games for the club before he and Nazem Kadri were traded to Colorado last July 1 for Tyson Barrie and Alexander Kerfoot.

Rosen was a key player for the American Hockey League's Marlies during his time in Toronto, especially during their run to a Calder Cup championship in 2017-18, when he produced 11 points (five goals, six assists) in 16 playoff games.

Leafs' head coach Sheldon Keefe was behind the bench for the Marlies throughout Rosen's two-season tenure there, giving him a good idea of what the defenceman could potentially bring to a Toronto blueline that's been banged up recently by injuries to Morgan Rielly and Cody Ceci.

Rosen skated in eight NHL games for Colorado this season, with two assists, but has spent the majority of his time with the AHL's Colorado Eagles (three goals, 12 assists in 35 games).

For Hutchinson, the trade is a much-needed fresh start in the midst of a difficult season.

Originally acquired from the Florida Panthers in December 2019, Hutchinson won Toronto’s backup goalie job out of training camp this season but was terrible out of the gate, going 0-4-1 with an .879 save percentage and 4.44 goals-against average.

By mid-November, he’d been waived and re-assigned to the Marlies, only to be recalled to the Leafs again later that month after Keefe had replaced Mike Babcock as head coach.

Hutchinson had a stronger showing the second time around with Toronto, winning four of his next five starts after being brought up. But when Frederik Andersen was injured on Feb. 2 against Florida, Hutchinson took over and played poorly, giving up three goals on 10 shots as Toronto blew a three-goal lead in an eventual 5-3 loss.

Keefe went back to Hutchinson two nights later against New York, and he was bad again in a 30-save performance. Hours after that 5-3 defeat, Toronto announced a trade with the Los Angeles Kings that brought in goaltender Jack Campbell and forward Kyle Clifford.

Hutchinson was waived for the second time on Feb. 13. He leaves Toronto with a 4-9-1 record on the season, .886 save percentage and 3.66 goals-against average.