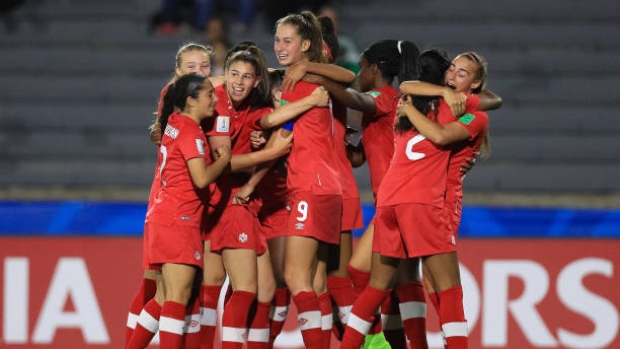 MONTEVIDEO, Uruguay — Captain Jordyn Huitema's 83rd-minute goal lifted Canada to a 1-0 win over Germany on Sunday, moving the Canadian women into the semifinals of the FIFA U-17 Women's World Cup for the first time ever.

The 17-year-old from Chilliwack, B.C., beat two defenders to knock in the winner.

"To be at the helm of this young team is just a privilege," said coach Rhian Wilkinson.

"Canada is a world-class team that can handle all types of formats and physical play. Our players really showed who they were today against a very strong German team."

The young Canadians will play Mexico, which rallied to beat Ghana in a penalty shootout Sunday, in the semifinal Wednesday. Canada lost 2-1 to the Mexicans in the CONCACAF Championship semifinal in June.

New Zealand faces Spain in the other semifinal Wednesday. Like Mexico, both teams needed penalty shootouts to reach the final four.

Only two previous Canadian teams, male or female, have reached the semifinals of a FIFA world championship. In 2002, Canada lost 1-0 after extra time to the U.S. in the inaugural FIFA U-19 Women's Championship (now the FIFA U-20 Championship). Meanwhile, Canada finished fourth at the 2003 Women's World Cup.

Canada had 58 per cent of the possession in a tight first half Sunday that saw only half-chances at Estadio Charrua. Neither team ventured much in attack.

Huitema had a rare chance in the 71st minute, getting in behind her marker but her shot was stopped.

Wilkinson, returning to her first-string roster, made eight changes from the team that lost 5-0 to Spain in the final round-robin game. Canada went into that game knowing it had already qualified for the quarterfinals.

Only Kaila Novak, Lara Kazandjian and Jade Rose stayed in the starting 11.

Canada was boosted by the return of Huitema from a one-game suspension. Huitema was sent off in Canada's 2-0 win over South Korea for an elbow during an aerial challenge.

Kazandjian had Canada's first chance, in the 33rd minute, off a Huitema feed, but the shot was easily handled. Andersen Williams shot high in the 35th minute.

Canada drew Germany in the quarterfinals after losing to Spain on Wednesday. That dropped it into second spot in Group D. Germany then blanked the U.S. 4-0 to finish atop Group C, setting up the final-eight showdown with the Canadians.

Canada blanked Colombia 3-0 and South Korea 2-0 in its first two games at the tournament. Germany beat North Korea 4-1 and lost 1-0 to Cameroon.

Twenty players on Canada's 21-woman roster saw action in the group phase, with only goalkeeper Sophie Guilmette yet to get on the field.