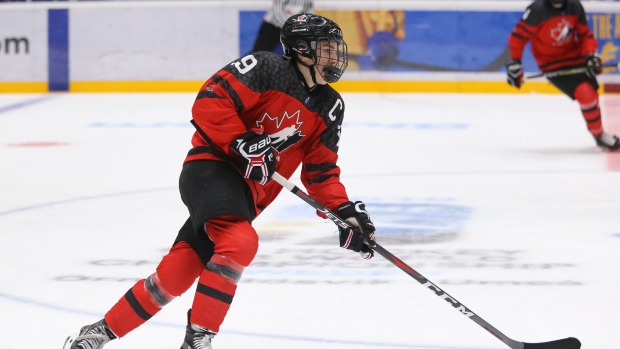 OAKVILLE, Ont. — Defencemen Braden Schneider, Peter Diliberatore and Thomas Harley were three of nine players released from Canada's world junior selection camp Thursday night as the team trimmed its roster to 24 two weeks before the start of the tournament.

The team will need to cut one more player before the world junior tournament begins Dec. 26 in the Czech Republic.

Canada's world junior hopes got a big boost earlier in the day with news the Arizona Coyotes have loaned centre Barrett Hayton to the national team.

The fifth overall pick in the 2018 NHL draft, Hayton has one goal and three assists in 14 games with Arizona this season.

The 19-year-old from Peterborough, Ont., was part of the Canadian setup that finished a disappointing sixth at last year's world junior hockey championship in Vancouver and Victoria, finishing the under-20 tournament with four assists in five games.

"He's a top-end guy and he's been playing up," head coach Dale Hunter said after the second of Canada's two exhibition games against a team of university all-stars. "He's a great leader. That's what you need.

"We always take a lot of skill, but (with his) leadership in the room, it'll help a lot."

One of five returnees, Veleno is scheduled to join his teammates in Europe closer to the start of the tournament.

"When you get veterans back that played before, it just means so much," Hunter said. "They can talk to the young guys about the pressures of playing, what it's like, and what the competition's all about.

Adding a potential No. 1 centre in Hayton also gives Canada plenty of options up front with Veleno, Dylan Cozens and Ty Dellandrea.

"He can play both ways, kill penalties, play power play and play against the top line," Hunter, the head coach of the Ontario Hockey League's London Knights, added of Hayton. "It'll really strengthen us down the middle."

Canada invited 31 players to this week's selection camp in Oakville, but with both Veleno and Hayton in the mix, the number stood at 33 names before cuts came down Thursday night.

"It's no fun," Hunter said of delivering bad news. "It is tough. They're kids and they all want to play, but that's the hard part about the job."

Hockey Canada had said it will wait as long as needed to finalize its roster.

The national team is scheduled to fly to Vienna this weekend to continue preparations before exhibition games Dec. 19 against Switzerland and Dec. 23 against the Finns.

Canada has won gold at the world juniors 17 times since 1977, with the last victory coming at the 2018 event in Buffalo, N.Y.

The players remaining in the selection camp roster are listed below: