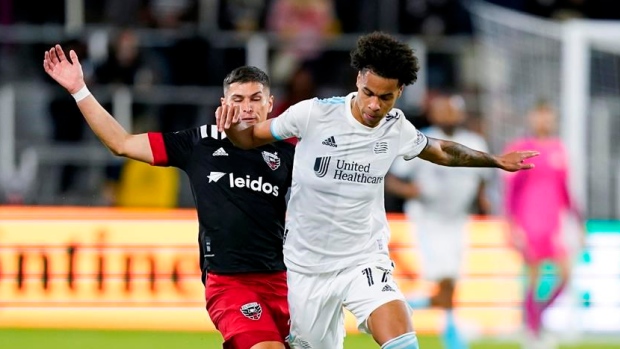 The 22-year-old from Brampton, Ont., who plays for the New England Revolution, received 31.13 per cent of the votes compared to 39.47 for the 18-year-old Pepi. Julian Araujo of the Los Angeles Galaxy was a distant third at 3.17 percent in balloting by MLS club technical staff, media and current MLS players.

The Young Player of the Year Award honours the top player in the league aged 22 and under. Players born on, or before, Jan. 1, 1999 were eligible for selection.

A product of the FC Dallas academy, Pepi led Dallas with 13 goals and three assists this season. In July, at 18 years 196 days, he became the youngest player in MLS history to score a hat trick, erasing the record set by then-Vancouver Whitecap Kekuta Manneh in 2013 at age 18 years 283 days.

Pepi’s 13 goals ties the single-season MLS record for most scored by a teenager. He is also only the second teenager to score 10 or more goals in a single season.

Pepi was named to the 2021 MLS all-star team, notching the game-winning penalty in a penalty shootout win over the Liga MX all-stars, 3-2 on penalties.

The native of El Paso, Texas, has three goals and two assists in four appearances for the U.S. team.

The elusive winger, named best young player at this summer's CONCACAF Gold Cup, has three goals and four assists in 16 appearances for Canada.

Buchanan is set to join Belgian champions Club Brugge KV after the season.