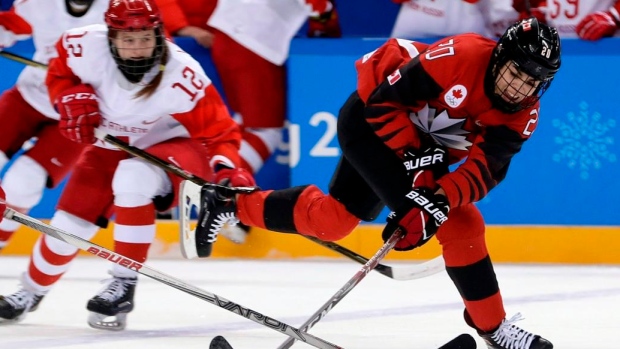 Sarah Nurse has stood in the crosswinds of societal and sport upheaval.

Her hockey career in flux because of a collective movement to further the women's game, the COVID-19 pandemic threw another layer of uncertainty on top of her hockey future.

Race relations and social inequality currently dominating public discourse pulled hockey's lack of diversity and gender inequality in the sport into those conversations.

Nurse, a biracial female hockey player and Olympic silver medallist with the Canadian women's team, has been forced to come to grips with the sheer number of people seeking her point of view.

Not overly active on social media, whenever Nurse posted a comment on racial inequality, the 25-year-old from Hamilton was "flooded with interview requests," she said.

"Definitely the last few months have been very overwhelming as they have been for a lot of people," Nurse told The Canadian Press. "I think I do still feel overwhelmed sometimes."

With no international games or Professional Women's Hockey Players' Association events on the horizon, Nurse doesn't have the platform her Edmonton Oilers cousin Darnell did during the summer's NHL playoffs to draw attention to racial injustice.

When Minnesota Wild defenceman Mathew Dumba took a knee during the first American anthem of the NHL's restart Aug. 1, Darnell and Chicago Blackhawks goalie Malcolm Subban rested their hands on Dumba's shoulders in a show of support.

Sarah Nurse's sponsor Adidas is providing a commercial avenue for Nurse to express her feelings to a broad audience. The forward is featured in a "Ready For Change" campaign.

That message encompasses her desires for Black, Indigenous and people of colour, women and girls in hockey.

"I know my experiences," Nurse said.

Adidas embarked on similar campaigns with other professional athletes, albeit with somewhat different messaging.

Kansas City Chiefs quarterback Patrick Mahomes, for example, is featured in a "Playing For Change, Ready For Sport" video spot.

"It's really a series that amplifies the voices of athletes, who I think want to return to play and return to their sports with a real purpose," Nurse explained.

"I talk to hockey culture and I think it's kind of a culture of conformity and a little bit of silence.

Nurse witnessed racist behaviour towards her Black father Roger, and grew up feeling like somewhat of an outsider in a largely white hockey community.

"We always looked a little bit different," she said. "There are different things that happened in locker rooms and different racist comments or microaggressions that occurred.

"So many people would say 'you're not black enough to be offended by that, or you're not like the rest of them.' That makes you feel very marginalized and that's racist in itself.

"The way we kind of dealt with it was I had to shut them up on the scoreboard. It kind of drove me to score more goals and to win hockey games and be the best player I could be."

The PWHPA emerged from the collapse of the Canadian Women's Hockey League. The association is working toward a women's professional league that offers the financial and competitive supports to make it sustainable.

The PWHPA, which includes national-team players from both Canada and the U.S., organized a series of exhibition games and showcase tournaments in a "Dream Gap Tour" in 2019-20.

While Nurse is back on the ice skating with fellow PWHPA players in Toronto, no games are yet on the schedule because of the pandemic.

The PWHPA made a move this summer to address an internal lack of diversity. Liz Knox stepped down from the board to make room for Nurse on it.

"What she did was a great act of allyship," Nurse said. "I think she looked at the board and said hey, this is an opportunity for us to make a change, have representation, bring in different experiences and ultimately diversify our board' because it was a blind spot that we acknowledged.