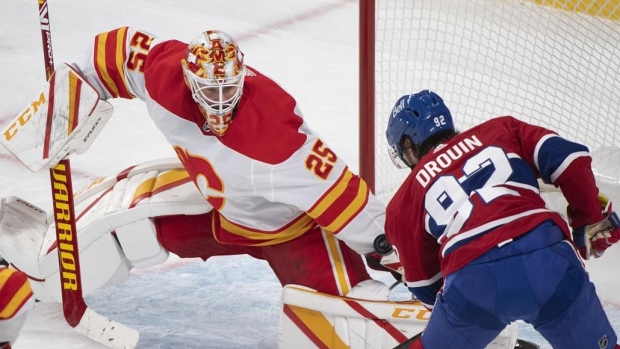 There will be no big birthday celebration for Calgary Flames goaltender Jacob Markstrom after shutting out the Montreal Canadiens on Saturday night in Montreal.

"Pretty sure it's a full lockdown so I'll be in my bed. Thanks for reminding me," Markstrom said.

One day before his 31st birthday, Markstrom made 37 saves in a 2-0 Calgary Flames victory over the Montreal Canadiens at the Bell Centre in Montreal Saturday night. Johnny Gaudreau and Mikael Backlund each scored a goal.

Markstrom was perfect, earning his second shutout of the season.

"When your goalie plays like that you're not going to lose, ever," Flames captain Mark Giordano said.

The Flames' (3-3-1) victory snapped a three-game losing streak, including a 4-2 loss to the Canadiens at the Bell Centre Thursday night. Montreal (5-1-2) had yet to lose a game in regulation before Saturday night's loss.

Canadiens goalie Jake Allen made 31 saves for his first loss of the season.

A controversial hit took place in the second period of Saturday's game, involving Canadiens centre Jesperi Kotkaniemi and Calgary forward Dillon Dube. As the Finnish centre skated behind the Calgary net, Dube's forearm launched into Kotkaniemi's head before he fell to the ice.

"Listen, I don't think I need to say much. It's pretty obvious what happened in everyone's eyes," Canadiens head coach Claude Julien said.

During the game, multiple reports surfaced about players from both teams possibly needing a change of scenery.

Agent Darren Ferris confirmed to The Canadian Press that two of his clients, Calgary forward Sam Bennett and Canadiens defenceman Victor Mete, have asked for trades.

The Flames and Canadiens weren't afraid to play aggressively against each other Saturday. Backlund won an opening faceoff while charging his head into Canadiens forward Jake Evans.

Calgary would soon score first. Gaudreau scored his fifth goal of the season, a power play goal, at 3:34 of the first period. The New Jersey native has a seven-game points streak dating back to his team's first game of the season.

Later in the period, as the whistle blew a play dead partway through the opening period, Montreal forward Corey Perry shoved Calgary defenceman Rasmus Andersson, before the latter decided to grapple with Canadiens rookie Alexander Romanov.

In the second, the Canadiens announced that Josh Anderson would no longer be available for the team during the game. Julien later revealed he had flu-like symptoms, but did test negative for COVID-19.

Kotkaniemi would later take a hit from Dube with a little over seven minutes to play in the second period. Canadiens teammate Shea Weber would later take a roughing penalty in the ensuing scrum. Kotkaniemi left to the locker room by the end of the period, but he returned for the start of the third.

The Flames tried to make it 2-0 with a wraparound chance by forward Joakim Nordstrom in the final period of play. Allen, sprawled onto the ice, had the puck in between his pads, but a video replay determined the puck had not crossed the line.

Backlund would eventually give his team a second goal by putting it in an empty net with 34 seconds to play.