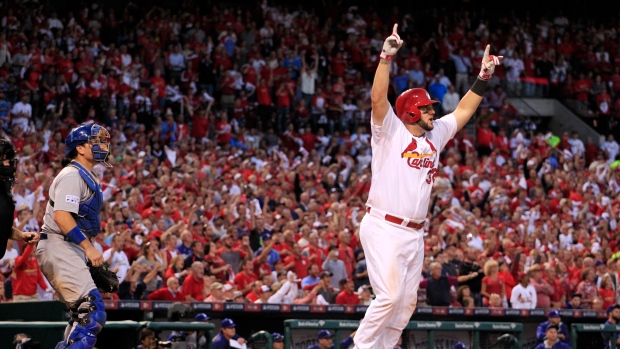 ST. LOUIS - Matt Adams could barely contain his enthusiasm and he didn't really try, either. He thrust both arms in the air while still in the batter's box and added a couple of big hops to his home run trot as he approached first base.

A stunned Clayton Kershaw, bent over at the waist with his hands on his knees, watched from the mound as the long drive off Big City's bat propelled St. Louis to a fourth straight NL Championship Series.

"Some people are calling it the Big City Leap," Adams said. "I was just super-excited, I didn't know what I was doing ... I knew I was jumping for joy."

The Cardinals tagged Kershaw in the seventh inning for the second straight time, riding Adams' go-ahead, three-run homer to a 3-2 victory over the Los Angeles Dodgers on Tuesday for a 3-1 win in the best-of-five Division Series.

"I don't think I touched the ground the whole way around the bases," Adams said. "Definitely the highlight of my career. ... I will never, ever forget this."

The Cardinals sent the Dodgers home for the second post-season in a row with a win over Kershaw. Last year it was in Game 6 of the NLCS.

"The season ended and I was a big part of the reason why," Kershaw said. "I can't really put it into words, Just bad deja vu all over again."

The NLCS starts Saturday in St. Louis, with the Cardinals hosting San Francisco in a rematch of 2012 won by the Giants.

Trevor Rosenthal allowed two runners in the ninth before getting Carl Crawford on a grounder for a game-ending forceout for his third save of the series. At AT&T Park in San Francisco, fans cheered when the rival Dodgers were eliminated.

"It was awesome, everything we did throughout that game," starter Shelby Miller said. "It was a heck of a game and a lot of fun, I know that."

An overwhelming favourite to win his third NL Cy Young Award in four years, Kershaw's October resume is a wreck.

Kershaw dropped to 1-5 with a 5.12 ERA in 11 post-season games, including three relief appearances early in his career. He has lost four straight starts to St. Louis over the past two postseasons.

"I've had success against them, too," Kershaw said. "It just seems like one inning gets me every time. And obviously that's not success."

While the steady Cardinals advanced to their ninth NLCS in 15 years, the defeat was a huge disappointment for the NL West champion Dodgers, who finished the regular season with a $256 million payroll that was $40 million higher than any other team.

Los Angeles remains without a pennant since winning the 1988 World Series.

"It's awful," catcher A.J. Ellis said. "It's devastating. It just kind of rehashes those old memories."

Manager Don Mattingly wasn't about to second-guess leaving Kershaw in the game, especially with a bullpen that's foundered. He wanted the lefty to get three more outs.

"It goes back to the same question: Is there anybody better, even on short rest, and even where he was at that point?" Mattingly said.

Kershaw started on three days' rest for the second time in his post-season career. He was dominant into the seventh, as he was in Game 1, but again started the inning with three straight hits.

The third hit Tuesday came when Adams, the burly bopper know as Big City, drove a curveball on Kershaw's 102nd pitch into the right-centre bullpen to put St. Louis up 3-2.

"I had a pretty good idea that it was gone," Adams said.

The red-clad crowd roared and twirled white towels as Kershaw made a slow slog back to the Dodgers' dugout.

Kershaw allowed one homer to left-handed batters while going 21-3 with a 1.77 ERA in the regular season. He gave up two to the Cardinals, with Matt Carpenter connecting in the opener. The left-handed ace is 0-3 with a 9.72 ERA in his last three post-season appearances.

Reliever Marco Gonzales earned his second victory of the series, after getting treated for a nosebleed. The rookie lefty got Adrian Gonzalez on a groundout to end the seventh and strand two runners.

Pat Neshek worked a perfect eighth for the second straight game and Rosenthal pitched the ninth for a second straight day, receiving two visits to the mound from catcher Yadier Molina and one from the pitching coach after a shaky start to the inning.

Kershaw had yielded only one hit through six innings and struck out nine, including three in a row in the sixth.

But Matt Holliday opened the seventh with a sharp single up the middle off second baseman Dee Gordon's glove, and Jhonny Peralta lined another single before Adams homered off a left-hander for the first time since July 7.

The Cardinals had an NL-low 105 homers this season and left-hander batters had only eight homers against lefty pitching. But lefties hit five off Dodgers southpaws in four playoff games.

Miller matched Kershaw into the sixth, when the Dodgers started the inning with two hits. They scored a run on Matt Kemp's double-play grounder and added another on Juan Uribe's RBI single against Seth Maness.

But Los Angeles wasted a chance to add on when Andre Ethier, playing in place of Yasiel Puig, was picked off third by Molina a call overturned by video review.

Cardinals: Adam Wainwright gets extra rest after a Game 1 dud when he was charged with six runs in 4 1-3 innings at Dodger Stadium. He was 5-0 with a 1.38 ERA in September with two complete games, one of them a shutout.

Scott Rolen, who earned three of his seven Gold Gloves at third base and was a key member of two World Series teams, threw out the first pitch.