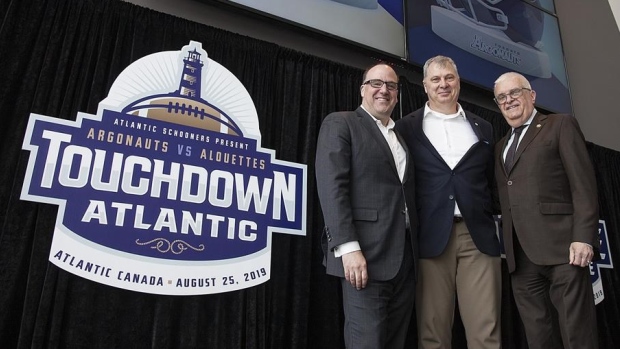 TORONTO — The CFL's 2020 edition of Touchdown Atlantic is a sellout, with all 10,000 tickets currently available purchased.

The CFL made the announcement Wednesday, a day after tickets to the July 25 game in Halifax between the Toronto Argonauts and Saskatchewan Roughriders were made available to public.

Now, the CFL is looking at ways to possibly boost capacity for the contest at Saint Mary's University's Huskies Stadium.

"We anticipated that a quick sellout might be possible and we have a number of plans to increase capacity for the big game," said Duane Vienneau, the CFL's chief Grey Cup and events officer. "We are actively exploring options with Saint Mary's University to potentially expand fixed seating and to increase capacity in both the Family and Party Zones."

The game will be preceded by a three-day "mini Grey Cup festival," a series of media events and community visits by both teams. The league will unveil details leading up to the contest.

When the CFL unveiled the game in January, it announced capacity at Huskies Stadium would increase from 4,000 to 10,000.

"We couldn’t be more thrilled with the response to this year's Touchdown Atlantic," CFL commissioner Randy Ambrosie said. "Our incredible fans from every corner of the country have come together to deliver the league a clear message: that Canadian football has a home in Atlantic Canada."

This will be the first regular-season game played at Saint Mary's. The CFL held an exhibition contest there in 2005.

Schooners Sports and Entertainment (SSE), a group trying to secure a CFL expansion franchise for Halifax, sponsor the game for a second straight year.

This year's Touchdown Atlantic will feature two teams which finished at opposite ends of the spectrum last season.

Saskatchewan, under first-year head coach Craig Dickenson, finished atop the West Division with a 13-5 record. Quarterback Cody Fajardo was a finalist for the CFL's outstanding player award after finishing as the league's passing leader (4,302 yards).

Saskatchewan's season, though, ended with a 20-13 home loss to the eventual Grey Cup-champion Winnipeg Blue Bombers in the conference final.

Toronto, meanwhile, missed the CFL playoffs for a second straight year. The Argos finished third in the East Division standings with a 4-14 record, with three of those wins coming against the league-worst Ottawa Redblacks.

Toronto has a new head coach in Ryan Dinwiddie, a former quarterbacks coach with the Calgary Stampeders. He replaces Corey Chamblin, who was let go after just one season in the job.

Toronto will give up a home game at BMO Field this season to participate in this contest. This will be the fourth Touchdown Atlantic appearance for the Argos, who played in the inaugural contest — a 16-16 exhibition tie with Hamilton in 2005.

Toronto had the CFL's worst attendance last year, averaging 10,652 spectators in six home games — another home game was the Touchdown Atlantic game in Moncton while the club didn't provide attendance figures for two others dates at BMO Field.

Saskatchewan was one of the CFL's top draws, which it has traditionally been. The Riders averaged more than 30,000 spectators at Mosaic Stadium and twice attracted more than 33,000 fans to their games.

The $29 tickets were in a general-admission area in one of the end zones at Croix-Bleue Medavie Stadium. Tickets in the other end zone, also general admission, were $45 while the cheapest grandstand ticket was $65.

Fans who purchased tickets at higher prices were offered credit towards additional tickets, credit for season tickets for the Atlantic Schooners' proposed first season in the CFL or a refund for the difference between the price points.