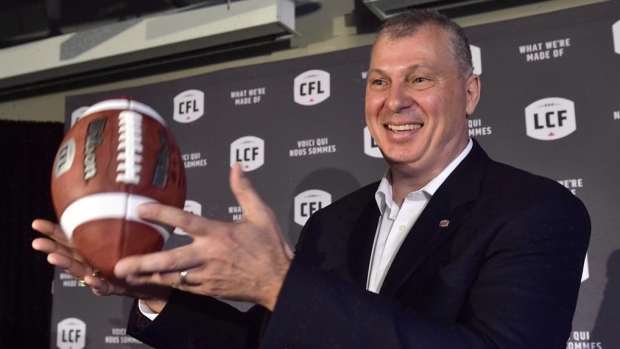 The league and CFL Players' Association have come to terms on a new collective bargaining agreement.

The tentative deal replaces a five-year contract that was set to expire Saturday.

Details of the agreement weren't immediately available, TSN's Farhan Lalji reported it will be a three-year deal.

Being told that the new #CFLCBA will be a 3-year deal, assuming its passed. Salary cap will continue to go up 50k per year, as it does in the current deal. Minimum salary to increase to 65k in year 2 and 3 of CBA. @CFLonTSN @TSN_Sports

Lalji added the salary cap will continue to go up $50K per year as it does in the current deal, with the minimum salary to increase to $65K in the second and third year of the deal.

The net effect of the #CFL salary cap going up less than 1% and the minimum salaries going up 20% is that veteran players will have to take pay cuts next off season.

"The net effect of the CFL salary cap going up less than 1% and the minimum salaries going up 20% is that veteran players will have to take pay cuts next off-season," Lalji reported.

Players will benefit from revenue sharing of 20 per cent of the television deal with TSN, CFL 2.0, and other revenue streams.

More CBA details:
1. Players will receive revenue sharing of 20% of the TSN deal, 2.0 & more.
2. 3 yrs of medical coverage.
3. Canadian QBs will now be in the ratio @CFLonTSN

There will also be some changes to the ratio. While TSN 1260's Jason Gregor reported earlier Wednesday the basics are not expected to change, Lalji reported Canadian quarterbacks will now be part of the ratio and teams must start at least three American starters that have played three years with their existing teams or four years in the CFL.

4. Among the American starters, 3 of them must have played 3 yrs with their existing teams or 4 yrs in #CFL. This in an effort to protect veteran players & build continuity.

The 3 yrs of medical coverage & revenue sharing are meaningful gains for players. @CFLonTSN

Lalji said this rule is an effort to protect veteran players and build continuity.

The contact is pending ratification by the players and approval from the league's board of governors. The CFL could give its approval as early as Wednesday at a previously scheduled meeting of its board.

Getting it ratified by the players will take longer. That's because the union must first present the deal to team reps, which will happen Wednesday. Then, it will be forwarded to the players.

The two sides met into the night Monday, got a head start on talks early Tuesday morning and continued talking until early Wednesday morning. The latest round of bargaining began Sunday night and Tuesday's session was the final scheduled face-to-face session prior to the end of the current deal.

The situation didn't look good last week when union executive director Brian Ramsay emerged from three days of talks saying the two sides weren't "necessarily where we need to be right now," in order to reach a settlement.

The league and players were negotiating monetary items, which is always a potentially contentious discussion. Last week, there was persistent talk they remained far apart on many financial fronts.

That presented a rather bleak scenario of a partial players' strike at the start of training camp if a new deal couldn't be reached by Saturday. Ramsay said last week players with the BC Lions, Saskatchewan Roughriders, Winnipeg Blue Bombers and Montreal Alouettes wouldn't report to the start of their respective camps without a deal

That’s because they'd be in a legal strike position and had been instructed by the union not to show up.

Players on CFL teams in Alberta (Edmonton and Calgary) and Ontario (Ottawa, Toronto and Hamilton) had been told to report to camp because Ramsay said they won't be in a legal strike position until May 23. That's when the union would've been in a position to orchestrate a full work stoppage.

However, Ramsay continually stated the union's top priority was securing a fair and equitable deal with the CFL. News of the agreement brought mixed reaction on social media.

Washington responded, "Lmao you got that feeling to huh?"

That solicited a response from John Bowman, the veteran Montreal Alouettes defensive lineman who participated on the CFLPA's bargaining committed.

"So y’all don’t think we did the best we could? Y’all think we just laid down?," he tweeted.

Later, Bowman tweeted: "... like you I was skeptical. But I can tell you being in that room this yr we had to fight for everything. And no matter what you never get everything you want and ppl are never satisfied lol that’s life."

Contract talks in 2014 between the CFL and CFLPA were testy. Negotiations broke down several times and there was even a threat of a strike before players ultimately reported to camp and both sides hammered out a five-year agreement.

CFL players have gone on strike once, in 1974, but the situation was settled prior to the start of the regular season.