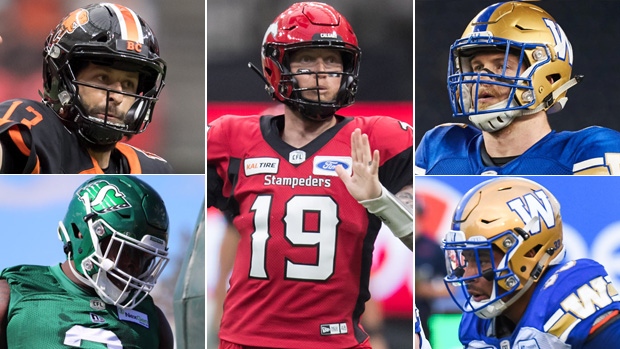 For the third straight season it was a two-horse race for top spot in the CFL of TSN Top 50 Players list between Bo Levi Mitchell and Mike Reilly, with the Calgary Stampeders quarterback coming out on top.

Mitchell is ranked No. 1, by a panel of media members across the league as well as our CFL on TSN commentators, after winning the Grey Cup and being named Most Outstanding Player in 2018. He had previously topped the list in 2015 and 2017. Reilly finished No. 2 on the list, marking the third straight year the two quarterbacks finished first and second in the Top 50 Players, with Reilly edging out Mitchell for top spot last year.

Hamilton Tiger-Cats quarterback Jeremiah Masoli made the biggest jump among ranked players year-to-year, going from No. 49 last year to No. 6 this year. And his teammate in Hamilton, cornerback Delvin Breaux, was the highest newcomer on the list, coming in at No. 9. Breaux’s return to the Top 50 Players coincides with his return to the league after three years in the NFL.

The highest-ranked player from last year’s Top 50 to not appear in this edition is Alex Singleton. Last year’s No. 5 was no longer eligible after signing with the NFL’s Philadelphia Eagles this off-season. The biggest drop from a player still active in the league is Lions receiver Duron Carter, who finished No. 8 last year and doesn’t appear on this year’s list.

The Lions and Edmonton Eskimos tied for the most players to appear on the list with eight each, while the Ottawa Redblacks had the fewest players ranked with just two – No. 15 Brad Sinopoli and No. 46 Lewis Ward.