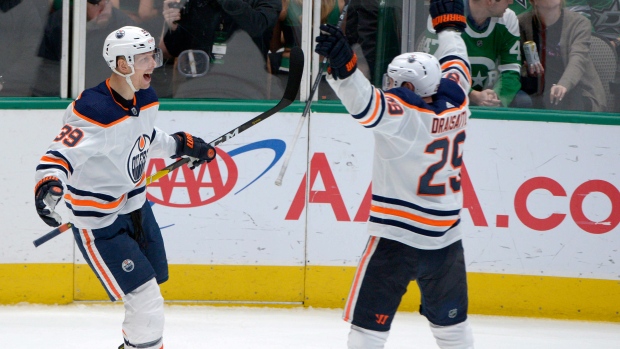 The Oilers got a man advantage 36 seconds into the extra period when Esa Lindell was called for tripping after reaching out with his stick in front of the Dallas net. Edmonton had four forwards on the ice when Chiasson's ninth goal of the season was a game-winner past Anton Khudobin.

“I'm usually a decoy,” Chiasson said with a smile. "We worked on it the past three or four weeks, more so going through our patterns and things like that."

Dallas took its second overtime loss in a row, but gained a point to get to 82. The Stars are third in the Central Division.

“That was one of our better games from start to finish. We just didn’t capitalize,” Stars interim coach Rick Bowness said. “Give their goalie all of the credit in the world. ... The team was a little tired and you could tell."

Koskinen, playing for the first time in three games, stood out for the Oilers a night after the offence carried the load in an 8-3 win at Nashville when they scored five goals in a span of just over five minutes in the third period.

Leon Draisaitl and Connor McDavid, the NHL's top two scorers, each had five points in that game. They both had an assist against the Stars.

“Coming out of that game (Monday) night, everybody's feeling good. We scored five goals in the third period. But (the Stars) came in with a purpose and we didn't handle it very well,” Oilers coach Dave Tippett said. “You do what you have to do to try and get points. ... It speaks volumes for the goaltender and the special teams.”

The Stars got their lone goal on their 33rd shot — and matched a season high with 43. The goal came more than 6 1/2 minutes into the third period when John Klingberg scored on a power play for a 1-all tie. It was the sixth game in a row with an assist for captain Jaime Benn, who made the final pass to Klingberg for his one-timer from the left circle.

Dallas went on the power play six times, one short of its season high. The last chance with a man advantage came inside the final three minutes of regulation, when Adam Larrson went to the penalty box for high-sticking.

Edmonton scored first midway through the second period when Ryan Nugent-Hopkins scored from just inside the circle after trading passes with Darnell Nurse. The secondary assist went to Draisaitl for his 108th point (43 goals, 65 assists).

Nugent-Hopikins and McDavid assisted on the overtime winner. That was McDavid's 63rd assist and 95th point.

“I have a chance to play, to watch, probably the best two players in the world right now every day,” said Chiasson, who got his first point in 11 games. “It hasn't been going my way, but found a way tonight."

Koskinen faced 16 shots in the first period, withstanding a couple of flurries by Dallas from just in front of the net. That set the tone for the night.

“I felt good,” Koskinen said. “I think it was a tough back-to-back games and we battled hard.”

NOTES: Khubodin stopped 25 shots in his fourth start in five games. ... Stars goalie Ben Bishop missed his second game in a row with a lower-body injury, though he did some work on the ice earlier Tuesday. ... Chiasson made his NHL debut with the Stars in April 2013, and had six goals with an assist in his first six games. ... Dallas defenceman Stephen Johns, who before January missed 22 months with headaches that may or may not have been related to concussions, was back after missing the previous three games with an upper-body injury.