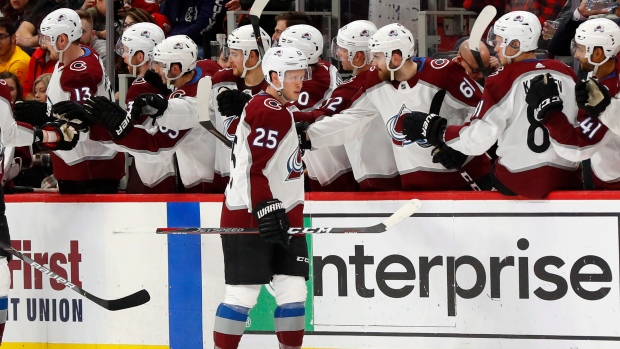 DETROIT — Gabriel Landeskog withstood a crunching hit while making a pass that sprung Logan O'Connor for a breakaway goal in the second period, and the Colorado Avalanche beat the Detroit Red Wings 2-1 on Monday night for their seventh straight victory.

Vladislav Namestnikov also scored for the Avalanche, who extended a franchise record with their ninth consecutive road win. Anthony Mantha had the only goal for Detroit.

With the score tied at 1, Landeskog was just inside his own blue line when he took a hit from Detroit's Robby Fabbri. As he was clocked, Landeskog released a pass up the ice to O'Connor, who was behind the defence at the other blue line.

“That was a selfless play. That's why he wears the `C' obviously,” O'Connor said. “That was a great pass by him — great look that set up the whole opportunity there.”

O'Connor went in and beat goalie Jonathan Bernier for his second goal of the season.

Mantha converted off a goalmouth scramble to open the scoring in the first, but the Avalanche equalized before the period was over. Ryan Graves took a shot that slipped through Bernier, and Namestnikov kicked the puck to himself in the crease and then stuffed it in the net with his stick.

O'Connor was called up from the AHL on Saturday, and Namestnikov arrived from Ottawa in a recent trade.

“I think that's Vlad's best game since he's been here," coach Jared Bednar said. "I think that's his third one. It looked like his first game he was thinking too much. Second game he got a little bit better, a little more involved.”

Colorado is a point behind St. Louis for the Central Division lead.

“We started good early until they scored, and then I thought we lost it there for the rest of the first period,” coach Jeff Blashill said. “Just mismanaged the puck.”

Detroit was outshot 21-10 through the first two periods. The Red Wings put on occasional pressure in the third, but goalie Michael Hutchinson did enough to hold them off.

Hutchinson, who also came over in a recent trade from Toronto, finished with 17 saves.

“Could have went either way. I like the way we battled until the end there," Detroit's Dylan Larkin said. “We've just got to find ways to generate more shots still, and make it harder on the goalie over there.”

NOTES: The seven-game winning streak is a season high for the Avalanche. ... Colorado is 20-6-4 against Eastern Conference opponents. ... Nathan MacKinnon got his 53rd assist of the season on O'Connor's goal. He also tied Alex Tanguay for seventh on the franchise list with 488 points.