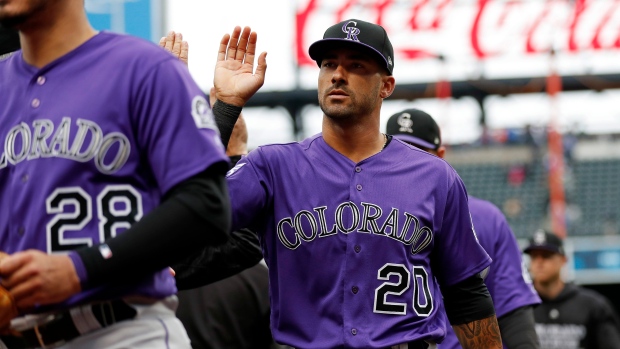 Colorado Rockies outfielder Ian Desmond announced on Instagram Monday night that he is opting out of the 2020 MLB season and also called for change across the sport.

"The COVID-19 pandemic has made this baseball season one that is a risk that I am not comfortable taking," Desmond wrote as part of a long thread of messages posted on Instagram.

Desmond is the fourth known player to publicly opt out of the MLB's 2020 season -- planned to open July 23 and 24 -- joining Mike Leake of the Arizona Diamondbacks, along with Ryan Zimmerman and Joe Ross, both with the Washington Nationals.

Desmond also urged the sport to improve its representation from the top down and do more to encourage Black children to play baseball growing up.

"Perhaps most disheartening of all is a puzzling lack of focus on making baseball accessible and possible for all kids, not just those who are privileged enough to afford it.

"If baseball is America's pastime, maybe it's never been a more fitting one than now," Desmond wrote.

He added that the killing of George Floyd last month in Minneapolis broke his coping mechanism and made supressing his feelings impossible.

The 34-year-old Desmond added that he will spend the rest of the summer working with youth baseball in his hometown of Sarasota, Fla.

Desmond was set to enter his fourth season with the Rockies and 12th in total before deciding to opt out. Desmond made his debut in 2009 with the Washington Nationals and played in D.C. until 2015.

Play was originally supposed to begin March 26 before COVID-19 pushed back the start of the season indefinitely. Players are currently scheduled to report to training camp on July 1.