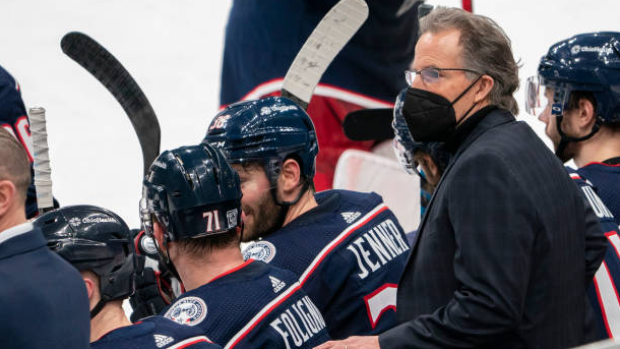 Kekalainen noted that the coaching staff has led the Blue Jackets out of slumps before and he's counting on them to do so again.

The show of support from management came just two days after Tortorella insisted he was not worried about the security of his job and the head coach said Tuesday he appreciates Kekalainen's support, but wishes the move wasn't needed.

"I hate him having to do that, but I appreciate it," Tortorella said. "I'm not sure what was said, but we're all big boys here. When you're losing games and are playing as poorly as we're playing, those questions need to be asked."

Kekalainen has already made one big splash this season, acquiring Patrik Laine and Jack Roslovic from the Winnipeg Jets this season for disgruntled centre Pierre-Luc Dubois. He had planned to address the Blue Jackets players on Tuesday, but could not due to a member of the team's hockey operations staff entering the COVID-19 protocol.

"I don't believe in quick fixes, that all of a sudden you blow up something you've been building for a while," Kekalainen said. "I have full confidence we're going to snap out of this."

Kekalainen said the Blue Jackets' biggest concern right now is that they need to have "the courage to just play the game and enjoy it and have the puck. We give up on the puck too easily. We play it safe, if you want to call it that."

The Blue Jackets, who sit fifth in the Central Division with an 8-10-5 record, have won just one of their past eight games entering Tuesday's matchup with the Detroit Red Wings.

Tortorella is in his sixth season as head coach of Blue Jackets, with his current contract set to expire this summer.

"He's done a great job for us," Kekalainen said, who added he has not seen signs of the players tuning out their head coach. "I think we owe him a lot for what he's done for this franchise...  All the other issues will get solved in time."

During his tenure in Columbus, Tortorella has a 217-150-47 record as head coach of the team and won the Jack Adams Award in his second year behind the bench