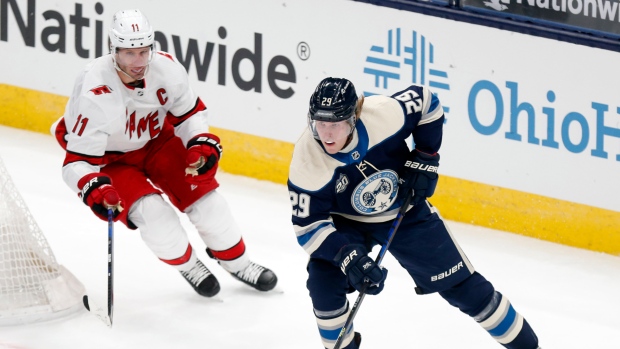 The 22-year-old's last shift of the game came with 13:41 remaining in the second period.

Roslovic scores the GWG for #CBJ vs #Letsgocanes .@TSN1290Radio @TSNHockey

"Shortened bench. That's going to stay in house," said head coach John Tortorella after the game. "I know you guys are going to try to work me on that. It wasn't because of the missed assignment. There's a number of things that come into play with that. That will stay in the locker room.

"It's what I feel I need to. The last thing I want to do is bench a player."

A lot of people will want to know about neither Laine nor Kukan playing the final period plus. Here is what John Tortorella had to say. #CBJ pic.twitter.com/avJ9Nz4tst

"Torts expects us to play as hard as we can. It doesn't matter who you are," said Atkinson. "Everyone knows that. If you're not giving 100 per cent and looking like you're trying, he's going to sit you. It goes for everybody, myself included. I've been that guy plenty of times. He just wants the guys that are going to work."

The native of Finland and fellow winger Jack Roslovic, who scored the game-winning goal on Monday, were acquired from the Winnipeg Jets in a blockbuster deal involving Pierre-Luc Dubois last month. Laine has tallied three goals in four games with the Jackets.

Dubois, who was also benched this season as a member of the Blue Jackets, had a falling out with Tortorella leading to a trade out of Columbus.

Columbus held on to beat Carolina 3-2 on Monday.