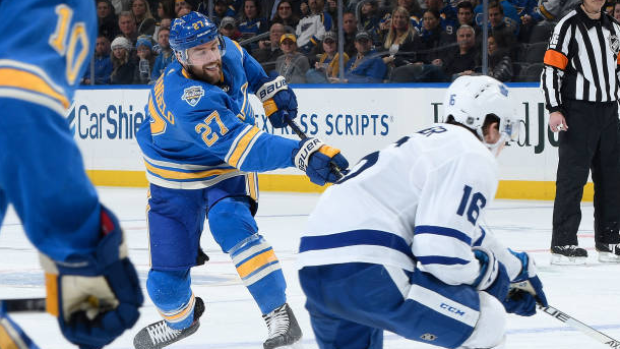 Not Worth the Price?

Kevin McGran of the Toronto Star believes the Maple Leafs will at least try to see if they can squeeze star defenceman Alex Pietrangelo under the cap this off-season, but isn't sure the moves the team would have to make would prove worth it.

Instead, McGran believes the Maple Leafs will pursue depth pieces to upgrade their defence in free agency, pointing to Zach Bogosian, Luke Schenn, Michael Stone, Dylan DeMelo and Cody Goloubef as options. If the team is willing to spend a little more, he wonders if T.J. Brodie or Dustin Byfuglien could be a fit.

The Maple Leafs currently have $6.1 million in projected cap space for this off-season after trading winger Kasperi Kapanen to the Pittsburgh Penguins last month.

Craig Morgan of azcoyotesinsider.com writes that veteran defenceman Niklas Hjalmarsson will not waive his no-move clause for a trade from the Arizona Coyotes this off-season.

TSN Senior Hockey Reporter Frank Seravalli wrote last week that the Coyotes are believed to be facing an internal mandate to shed salary this off-season and pointed to Hjalmarsson, Derek Stepan and Michael Grabner as options, in addition to Phil Kessel.

Hjalmarsson, 33, is under contract through next season with a $5 million cap hit. He had one goal and five points in 27 games this past season, adding one assist in nine games during the Return to Play.

A three-time Stanley Cup champion with the Chicago Blackhawks, Hjalmarsson has spent the past three seasons with the Coyotes.

After reports that his client had signed a contract in the KHL, the agent for New York Islanders forward Josh Ho-Sang, Patrick Bedell, clarified that no deal of any kind is in place for next season.

Josh Ho-Sang has not signed a contract for the 2020-21 season. Any report stating otherwise is inaccurate. Source - myself, his agent.

Ho-Sang, 24, will be a restricted free agent with arbitration rights this fall. Selected 28th overall in 2014, Ho-Sang did not appear in any games with the Islanders this season. Splitting time in the AHL between the Bridgeport Sound Tigers and the San Antonio Rampage, he had four goals and 13 points in 22 games between the two teams after sitting out the first part of the season as the Islanders looked to work out a trade for him.

Ho-Sang has appeared in 53 career games with the Islanders, posting seven goals and 24 points.