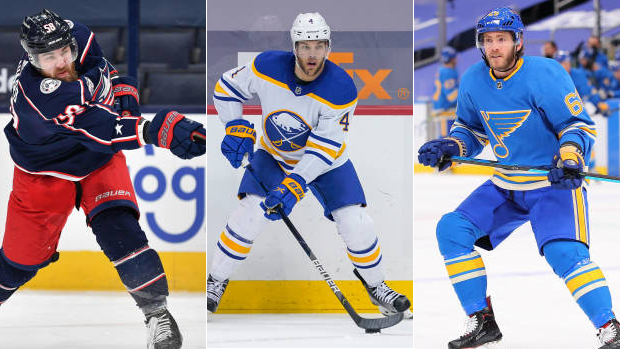 After a quiet month leading up to the trade deadline, the market is starting to heat up with two trades in as many days.

The Florida Panthers cleared out Brett Connolly's $3.5 million cap hit through 2022-23 in Thursday's five-player deal with the Chicago Blackhawks and it appears the Panthers could put that space to use before Monday's deadline.

"I wouldn’t say they’re all in because I think first-year general manager Bill Zito still has the eye on the future with this team, but, yes, because this team has played so well I think he wants to go out and make a move or two before Monday’s deadline to reward his group for how well they’ve played," TSN Hockey Insider Pierre LeBrun said on Insider Trading.

"Now, before making a move, he had to free up some cap space, free up some money and that’s what he did with the deal with Chicago, with the Blackhawks taking the Brett Connolly contract. Now he can set his sights both potentially on a top-four defenceman – we know they lost Aaron Ekblad – and potentially a top-six forward. He did actually, I’m told, kick the tires and call on Kyle Palmieri like a lot of teams did before the New York Islanders got him, so, who knows?

"Perhaps a reunion with David Savard who’s on the trade market from Columbus? But either way, the Panthers plan to be a bit of an action team here with measure before Monday."

Savard, listed at No. 1 on the TSN Trade Bait board, was held out of the Blue Jackets' 6-4 loss to the Tampa Bay Lightning on Thursday as a precaution ahead of the deadline. The 30-year-old, who carries an expiring $4.25 million cap hit, has one goal and six points in 40 games this season.

The Panthers currently sit third in the East Division, but are just one point back of the Carolina Hurricanes for first with two more games played.

With Taylor Hall out of the Sabres lineup, it appears his days are numbered in Buffalo, but the longer he stays on the market the lower his value may get.

LeBrun wrote in The Athletic Thursday that one executive believes Hall could be acquired for a little as a second- or third-pick and a contract to make the money work with Hall's $8 million cap hit if he's still available on Monday afternoon.

TSN Hockey Insider Darren Dreger reports that general managers who are interested in the pending unrestricted free agent are currently speaking to his agent on what an extension might look like, which could allow the Sabres to maximize their value.

"Ongoing conversation and discussions between Kevyn Adams, the general manager of the Buffalo Sabres and multiple teams I’m told are now in," Dreger said. "We shouldn’t be surprised by this, it seemed like there were fewer teams involved prior to the trade with Kyle Palmieri and Travis Zajac going to the New York Islanders from the New Jersey Devils. That seems to have loosened things up a little bit but to a point, managers are talking to Taylor Hall’s agent, Darren Ferris, and they’re wondering what an extension to a contract might look like.

While the Toronto Maple Leafs have been looking for a forward to boost their chances at a Stanley Cup run, TSN Senior Hockey Reporter Frank Seravalli said Thursday the team is not involved in the Hall sweepstakes at the moment.

"I think as we all try and sort out exactly what that market for Taylor Hall does look like, a lot of people are wondering could the Toronto Maple Leafs be in the mix for Taylor Hall? I’m told the answer to that is no," Seravalli said. "Now, could that change? Yes, of course the Maple Leafs are going to monitor what the price on Hall continues to be until the deadline hits. If he’s not traded before then, they’ve been interested in Mikael Granlund, they’ve been interested in Kyle Palmieri. It seems like those two guys may not work out and all things could add up to a pretty quiet trade deadline for the Leafs.

"But one thing that they continue to explore are opportunities on the goaltending market and what that may look like leading up to Monday at 3 p.m. as they potentially look for some insurance for Frederik Andersen and Jack Campbell."

Hall has two goals and 19 points in 37 games with the Sabres this season. He's three years removed from winning the Hart Trophy with a 39-goal and 93-point campaign with the New Jersey Devils in 2018.

Connor McDavid and Leon Draisaitl own the top two spots on the NHL scoring charts, but they're followed on the Edmonton Oilers stat sheet by defencemen Tyson Barrie and Darnell Nurse.

After McDavid (69 points) and Draisaitl (61 points), only Ryan Nugent-Hopkins has more than 18 points among Oilers forwards this season. With that in mind, Craig Button joined That's Hockey on Thursday to discuss what moves the Oilers could make to boost their scoring depth ahead of Monday's deadline.

Button pointed to St. Louis Blues winger Mike Hoffman as one potential option for the Oilers to bolster their offensive group. Hoffman jumped to No. 3 on the TSN Trade Bait board Wednesday with the St. Louis sitting outside the playoff picture in the West Division.