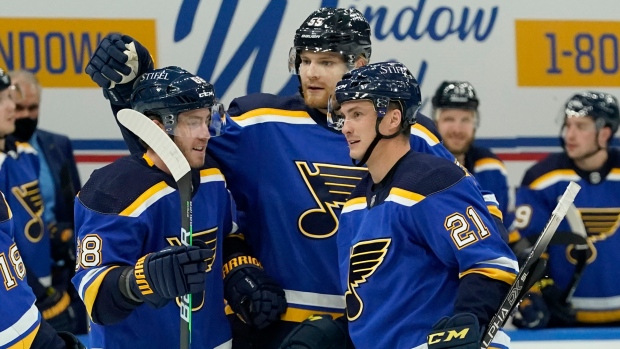 Winless in their past seven games, the St. Louis Blues have dropped out of the playoff picture as the NHL's trade deadline approaches.

And it appears general manager Doug Armstrong could be subtracting as a couple of his pending unrestricted free agents have made TSN Senior Hockey Reporter Frank Seravalli's Trade Bait board, which is now expanded to 40 players and assets.

"One guy who has nine goals and 21 points on the season is Mike Hoffman, a pending UFA who could also be on the move," explained TSN Hockey Insider Pierre LeBrun said Tuesday on Insider Trading.

"The St. Louis Blues are not out of contention but we know from GM Doug Armstrong's history, that he's not worried about trading pending UFAs when his team underachieves. He traded Kevin Shattenkirk at the deadline in 2017 despite being in a playoff spot. He traded Paul Stastny to Winnipeg in 2018 despite being a point out, and word is, from talking to different teams around the league, that he's open to potentially moving some pending UFAs. The Blues have disappointed.

"Hoffman (ranked third on the list) would be one, perhaps Tyler Bozak (ranked 19th)  is another."

Hoffman signed a one-year, $4 million contract with the Blues in January.

Bozak carries a $5 million cap hit in the final season of a three-year deal signed with the Blues as a free agent in 2018. The 35-year-old has two goals and four points in 14 games this season.

Check out the full, updated Trade Bait list below: